Man fatally shot after dispute outside bar in Midtown Manhattan 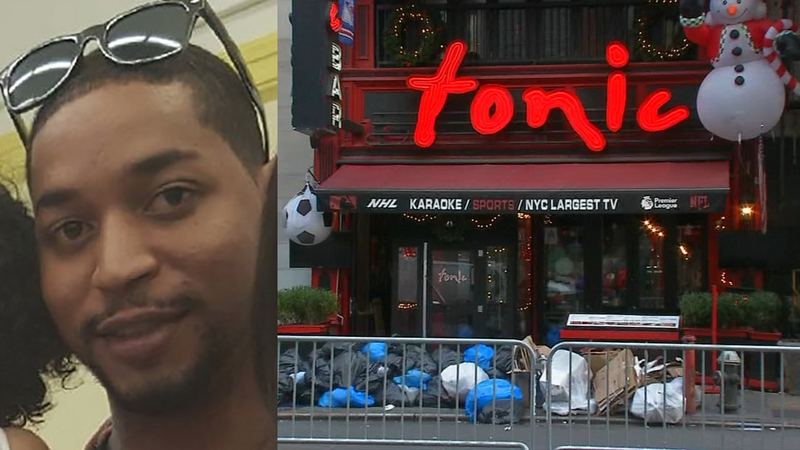 Search for the gunman who opened fire near Times Square

MIDTOWN, Manhattan (WABC) -- Police are searching for a gunman who shot and killed a man after he left a bar in Midtown Manhattan early Monday.

The shooting happened just after 3:50 a.m. outside the Tonic Bar on 7th Avenue near Times Square.

Authorities say 33-year-old Perseus Salichs exited the bar and encountered a woman who was clearly upset, with the alleged gunman trying to calm her down with little success.

Salichs somehow became involved and then got into a dispute with the suspect, and police say the suspect showed he had a gun and soon after pulled the weapon and shot Salichs in the head.

"It was another guy who fired the shot, and he just started running and took off," Ray's Pizza employee Zack Broja said.

There were several people outside, including a woman who ran to help, saying the victim had been shot in the forehead.

"I took his pulse and there was a pulse that was very faint, and the ambulance was there within a couple of minutes to take him," the woman said. "I had him in my arms. I was also trying to help the woman who was with him."

"He should not have died like that," the victim's aunt, Marisol Salichs said. "I cannot make anything of this right now."

The suspect fled on foot. He was described as a Hispanic man with a thin build, wearing a black skull cap and a black jacket.

Given the brazenness of the shooting, detectives initially suspected the gunman and victim knew each other. But after interviewing witnesses, including the woman, it is now believed she is the common denominator and the two were strangers.

"He actually wanted to me to go down to the bar with him, but I was so busy," said friend Edwin Lopez, who considered Salichs to be a big brother. "He was just one of the good people who always stuck by and helped me out, whether I was hungry, hurt, sick...He always showed me the ropes. When my mom passed, his mom was like my mom. He showed me, you know, this is how you put a bank account together. This is how you put a tie together."

Seventh Avenue was closed between West 49th and West 48th streets for hours before police barricaded off the eastern side of Seventh Avenue in front of the bar, in a continuing search for evidence.

"Everybody wants to be the tough guy," Lopez said. "Well now, two people's lives are ruined because of one tough guy's decision."

Salichs, a father of three girls, worked at a nearby Buffalo Wild Wings and was with other employees who were apparently invited to the bar by Tonic employees.

Police interviewed witnesses who were in the area at the time and went to nearby stores searching for surveillance video.