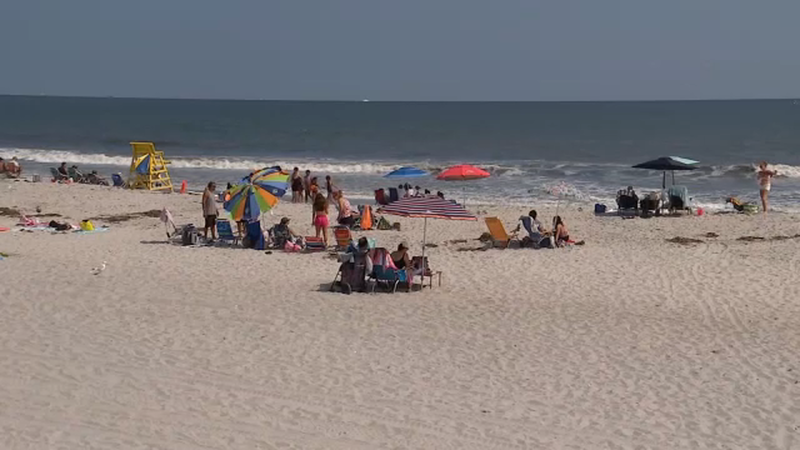 TOWN OF HEMPSTEAD, Long Island (WABC) -- The Town of Hempstead in Nassau County reopened its beaches Wednesday afternoon after they were closed for a few hours following shark sightings.

Town of Hempstead Supervisor Don Clavin said that around 1 p.m. lifeguards, who are trained to identify sharks, spotted a blacktip reef shark about 20 yards offshore at Lido Beach.

A second lifeguard witnessed a shark jump out of the water.

"It was about 20 yards offshore. Simultaneously to that, we had another lifeguard come over and say that they saw a shark breach out of the water and spin," Lido Beach lifeguard Julia Burns said.

They immediately closed the town's beaches and got all swimmers out of the water.

Sightings were also reported at Long Beach and Jones Beach.

The sharks, named for their black-colored fins, are native to the Caribbean and are typically seen in our area.

Clavin said their presence is concerning because they typically feed on smaller fish that tend to stay near the shoreline.

"We have the jet ski in there, we have our boat patrols out there, we have, actually, guards walking up and down the shoreline," Clavin said.

"This is multiple sharks spotted throughout this shoreline. We're talking four miles of beach, right here, from Point Lookout to Long Beach. And we're going to take every precaution and keep this up the entire season," Clavin said.

At a 3 p.m. briefing, Clavin said no sightings had been reported in the last 45 minutes. The town's beaches reopened soon after, but swimmers were only allowed into the waters up to their knees.
EMBED More News Videos

Town of Hempstead officials and lifeguards hold a briefing after sharks were spotted at Lido Beach.

It's the latest in a rash of recent sightings and shark interactions at beaches on Long Island.

Multiple spotted off Jones Beach Tuesday, one day after a lifeguard there was potentially bitten, and as a result, swimming was prohibited until further notice.