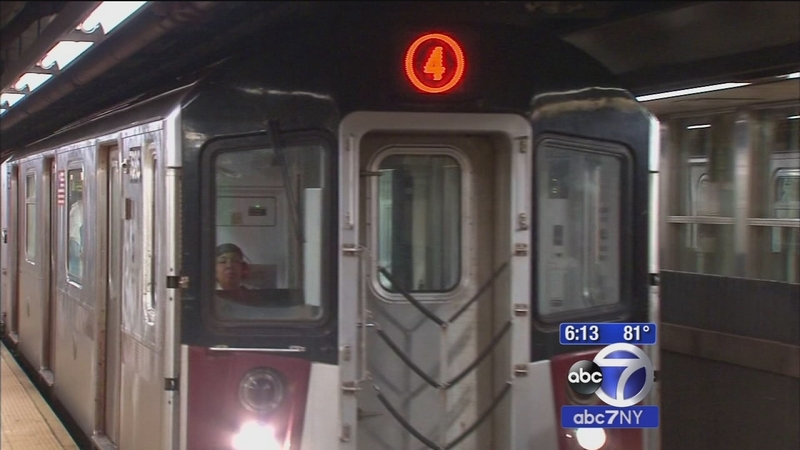 NEW YORK (WABC) -- Train delays have increased as the New York City subway system's on-time performance has steadily deteriorated, and the MTA should do more to fix the underlying causes, many of which are controllable, according to an audit released Thursday by New York State Comptroller Thomas DiNapoli.

"The subways are New York City's arteries, yet on-time performance continues to be an issue," DiNapoli said. "The MTA has actually lowered its own expectations for addressing subway delays. We're encouraged that MTA has put more money toward improving the ride for straphangers, hopefully it will help improve on-time performance."

The audit highlights the decline in subway on-time performance during 2013 through 2014. The MTA's Transit division considers a subway train on time if it reaches the end of the line within five minutes of its scheduled arrival and stops at all of its scheduled stops. In 2013 and 2014, the MTA's goal for on-time performance was for 91.9 percent of trains to arrive on time, and it fell far short in meeting that target.

On weekdays in 2013, subways were on time 80.5 percent of the time. Those delays worsened in 2014, when just 74 percent of trains were on time. Subsequently, the MTA lowered its goal to 75 percent of subways running on time. The five other major U.S. transportation systems contacted by auditors had an on-time performance goal of at least 90 percent.

Auditors examined what caused more than half of the almost 500,000 train delays from March 1, 2013 through March 31, 2014 to determine what steps the MTA took to improve on-time performance. Some delays were controllable (car equipment problems, track work), while others were not (sick customers, inclement weather, police investigations). The audit looked at some of the controllable causes that accounted for more than half of the delays to determine if the MTA could show efforts to address these issues.

Car Equipment: Three district managers said subway car equipment problems, which caused 6 percent of the delays, were caused by older trains and lack of repair parts. However, when auditors reviewed "rolling stock" on 20 lines, they found that the oldest cars on the C line had a comparatively high on-time performance, while some of the newer cars, like those on the F line, had comparatively low on-time performance.

Track Gangs: One official said that delays attributed to "Track Gangs" -- track work crews -- were caused by changes in flagging rules introduced in 2009 that require trains to run at slower speeds for extended distances. The official provided auditors with the procedures, but did not provide evidence to support the contention these procedures caused delays.

Employees: Other officials said delays were caused by new employees who were inexperienced with keeping to the schedule. Officials provided a report that showed 1,173 new hires in 2013 and 2014, but could show no analysis of delay categories by employee or employee type. Auditors reviewed train incident reports attributed to employees and found eight of the 15 involved a probationary train operator or conductor. Further analysis in this area could help reduce future delays, the audit concluded.

The audit sought to determine what, if anything, was being done to address the underlying root causes of train delays. Senior MTA officials said they had multiple work groups and committees, including a delay management workgroup, focused on the problem. Auditors met with 12 of that workgroup's 17 members and asked them about efforts to reduce delays, but none mentioned the workgroup's efforts.

MTA officials also offered little evidence that any of these groups or committees had come up with formal plans or programs to address the root causes of delays.

DiNapoli's audit recommended that the MTA:
--Identify the underlying causes of recurring train delays and develop plans to proactively address the causes; and
--Require monthly feedback from subways' managers on actions they are taking to address recurring categories of train delays.

The MTA disagreed with the audit's finding that it lacked formal plans to address causes of delays and asserted that its assessment of wait time between trains is a better indicator of subway service. But DiNapoli's auditors noted that it is not unreasonable to expect that after years of acknowledging the delays caused by growing ridership, the MTA would have more to show for its efforts than a 17-slide Power Point that is dated after the auditors' field work was completed.

The presentation suggested that riders' wait times were a better service measurement than on-time performance, but didn't address plans for correcting the problems of getting the riders to their destination on time. In addition, the MTA's own survey of straphangers found delays during trips (reflected in on-time performance) were only slightly behind wait times at riders' highest levels of concern. The audit also noted that wait times have grown worse alongside train delays. The MTA's full response and the auditors' comments can be read in the audit, which is available by CLICKING HERE.
Related topics:
trafficnew york citymtasubway
Copyright © 2021 WABC-TV. All Rights Reserved.
More Videos
From CNN Newsource affiliates
TOP STORIES