Subway service close to normal, but power outage cause unknown 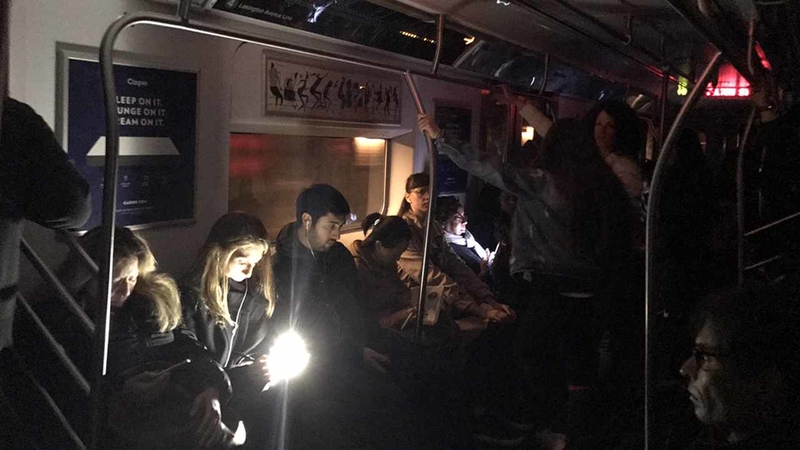 Subway service close to normal, but outage cause unknown

MANHATTAN (WABC) -- A power outage at the Seventh Avenue and West 53rd Street subway station led to a hellish commute Friday morning, with crowded trains and stations due to delays and suspensions on several lines.

At Hoyt-Schermerhorn Streets station after reports of the F train changing over to the G line.

Service was completely halted on the B, C and M lines, and MTA spokesman Kevin Ortiz said some passengers were stranded in the dark except for phone lights.
Some riders reported a commute that measured two to three hours.

Con Edison and transit crews are working to determine what triggered the hours-long outage that affected the signals, which began around 7:30 a.m. The MTA had generators in place at the location by 11:30 a.m., allowing them to restore power.

Once the problem is identified, workers will fix it so that the system is not reliant on the generators. Delays persisted into the evening. However, trains are still bypassing the station at Seventh Avenue and 53rd Street where the outage occurred.

A, D, E, F, J, N, Q and R trains were all impacted by the outage, mostly delayed or running on different lines.

There were no injuries or evacuations reported.

Con Edison first investigated the power issue at West 42nd Street and Sixth Avenue, but did not find any problems there.
Several people took to social media to voice their displeasure:

@MTA y'all a shame! A damn SHAME! Yet ya want to raise the fare prices what seems like every other month. pic.twitter.com/GP1uCTdozB

People cannot even make it to the train platforms due to this #MTA power outage in #NYC pic.twitter.com/A0iSwbH8Xc

Oh MTA, why must you break my heart everyday? pic.twitter.com/XDFzfSQwzC