WPVI
HOCKESSIN, Del. -- Authorities say a driver in Delaware lost control and his car struck three other vehicles before going airborne and crashing into the second floor of a home.

It happened around 6:00 p.m. Sunday in the 1600 block of Old Wilmington Road in Hockessin.

Linda Brizendine and her husband say they and their daughter were in their home - a large barn converted into a two story home decades ago.

That's when they heard the driver of a Mitsubishi sedan slam right into their three vehicles, destroying them.

The car then flipped in midair and crashed right into a second story bedroom. 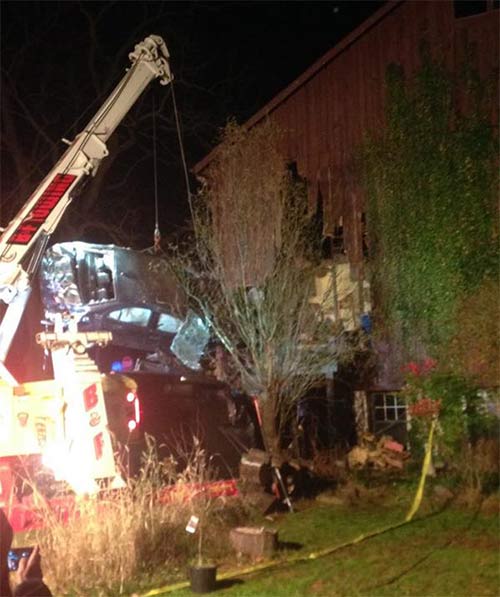 The home is a 100-year-old structure made of some tough wood but it was no match.

"Walked into the hallway and saw that part of the wall collapsed and a large cedar wardrobe was knocked over and things had been strewn and realized what we were looking at was a tailpipe," said Brizendine.

Neighbors say on this 35 mile per hour road, the driver lost control on a sharp curve. Once he hit those vehicles, the impact catapulted his car right into the house.

"I just wish that they would just slow down because they come down out of Pa. - a shortcut from Kennett Square down here and they get used to running 50 mph and they forget that they're in a residential area," said John Anderson.

On Sunday night, the work began to remove the car from the house. Firefighters and crews secured the structure and moved in a large tow truck.

Meanwhile police started their investigation into what exactly caused the crash.

"This is not a modern construction so we're fortunate otherwise it would have been a lot worse," said Brizendine.

The Brizendines have lived here for nearly 30 years and are having an engineer check on the safety of the structure.
Related topics:
trafficdelawarecar crashcar accidentaccidentcrashdel. news
Copyright © 2020 WPVI-TV. All Rights Reserved.
More Videos
From CNN Newsource affiliates
TOP STORIES