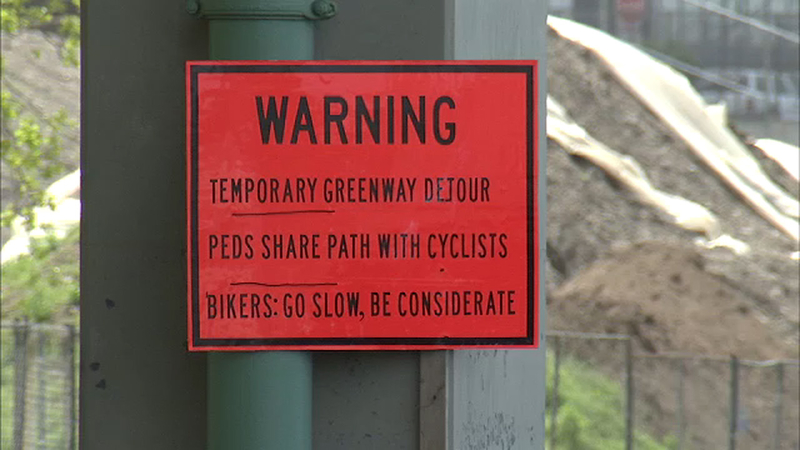 Is unfinished bike path an accident waiting to happen?

UPPER WEST SIDE, Manhattan (WABC) -- Construction causing congestion is nothing new, but when you merge cyclists and pedestrians together on a popular path along the Hudson River, many say accidents are bound to happen.

"I've seen two accidents and a lot of near misses, and this is just the beginning of the summer season when it starts to get busy," cyclist Chris Mallon said.

Since November the picturesque bike path through Riverside Park South has been closed as part of a larger renovation project.

"I actually fell off my bike, and then my daughter was behind me and fell off her bike as a result," Upper West Side resident Meredith Bonugli said. "It was down at the other side of the path, but it's very narrow."

Persistent cold weather delayed completion, so in the meantime, cyclists and pedestrians have had to share a narrow stretch between 59th and 70th streets, forcing headaches, bottlenecks, and in some cases, collisions.

"We were up by the Boat Basin on 79th, and my children were crossing the path to go see the water," Brianna Dangelo said. "And there was a biker that was going pretty fast and yelled at us to get out his way."

Although the New York City parks department does not have any accidents on record -- and, in fact, only one formal complaint -- those who live nearby and visit frequently call the recent merger a dangerous combo.

"We have a lot of people who think this is the Tour de France when they ride along here, so we have the combination of those people riding with people who are running with their earbuds not paying attention, people with their baby strollers," Mallon said.

However, with construction expected to be complete in the coming weeks, Parks Enforcement Patrol has also been monitoring the greenway bike lane during high traffic times to ensure people are following the rules. Still, some are skeptical if it's enough.

"Maybe divert bike traffic off that altogether," Mallon said. "I don't mind taking it up onto the street and riding along the street. I wouldn't have an issue with that. It's designed for pedestrian walking, and you have people speeding on bicycles. It's a bad combination."