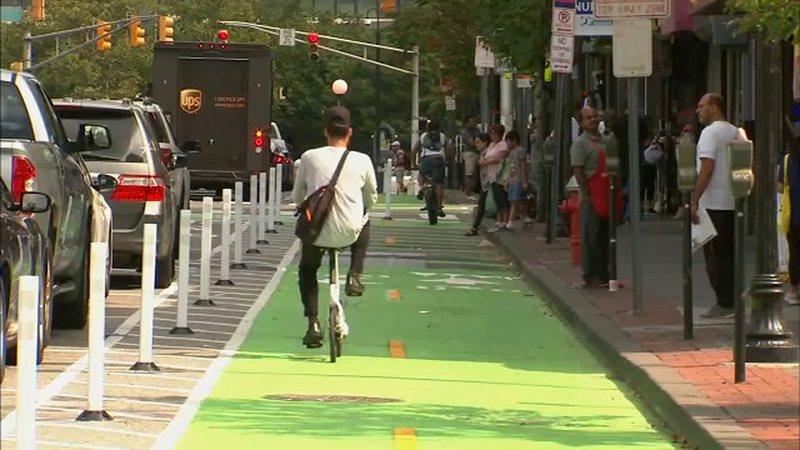 JERSEY CITY, New Jersey (WABC) -- Jersey City is taking a cue from the Big Apple and enacting its own version of "Vision Zero" plan to protect pedestrians and cyclists.

There are now four miles of protected bike lanes to the city, with more to come.

"This feels more separated from the cars, so you feel really safer," cyclist Stephanie Doucet said.

A row of parked cars and pylons separate the bright green bike line, which is 8 feet wide, from the flow of traffic.

"After New York City adopted Vision Zero, Jersey City thought it would be wise to be the first in the state of New Jersey," Mayor Steven Fulop said.

Officials say the protected bike lanes are a simple concept with a very meaningful goal -- to establish a low-stress, dedicated space for cyclists that is separated from vehicles

"This is for people who really would like to ride their bike around the city but don't feel safe doing it," Bike JC President Patrick Conolon said.

The purpose is reduce vehicle speeds and the number of crashes, along with improving the mobility and accessibility of all roadway users.

"It definitely helps me, because some drivers are not mindful of walkers or bikers," cyclist Lexie Levin said. "So it's definitely an extra insurance for safety."

It takes approximately two weeks to construct a protected bike lane on one city block, so Jersey City plans to have 20 miles installed by the end of the year. And officials say they will focus on the most dangerous streets.

"We found that just on 16% of our streets, something like 55% of the fatalities are happening on that minority percentage of streets," Jersey City Senior Transportation Planner Barkha Patel said. "So that taught us that we could focus on certain corridors and have maximum impact."

But like in New York as well as other cities, there have been some complaints.

"We had the same feedback, people were concerned about parking spaces," Fulop said. "We tried to minimize the number of spaces that were lost, but at the end of the day, there's going to be a small number always that gets sacrificed as a trade-off here."