WABC
By Candace McCowan
UNION SQUARE, Manhattan (WABC) -- The MTA announced Wednesday that cameras will be installed on all M14 Select Buses to catch rule breakers traveling the 14th Street Busway, weeks after its dramatic transformation, in an effort to speed up service.

The cameras will automatically capture any vehicle that is standing in a bus lane or at a bus stop for more than five minutes.

Officials say the new 14th Street Truck & Transit Priority lanes have contributed to a 38% decrease in travel times and a ridership jump to more than 32,000 daily customers.

"The bus-mounted camera system on 14th Street will be a game-changer for our service," MTA Managing Director Veronique Hakim said. "Taken together with customer-focused upgrades such as new bus boarding platforms, we expect to see continued, sustained improvements in bus speeds, M14 ridership and travel times."

The busway has been in existence for about a month and a half, and the MTA has already installed the cameras on other routes.

The system collects multiple pieces of evidence to ensure that vehicles making permitted turns from bus lanes are not ticketed.

The package of evidence is transmitted to the Department of Transportation for review and processing, and the program is administered in partnership with DOT and the Department of Finance. The cameras, which already are enforcing bus lanes on the M15 SBS and B44 SBS routes in Manhattan and Brooklyn, have observed more than 20,000 violators since enforcement began October 7 on the M15 SBS route.

During the M14 bus camera's initial 60-day grace period, motorists who block bus lanes are issued a warning that does not carry a fine.

The graduated fine structure applies to the type of violation and is not specific to the bus route, therefore a motorist that is ticketed for blocking a bus lane on 14th Street and subsequently is caught blocking a bus lane on the M15 or B44 SBS route will be subject to a fine of $100 for the additional offenses within a 12-month period.

An advocacy group called the Bus Turnaround Coalition did a study on bus service, giving the NYPD a B grade for coordination with the MTA but an F for agency culture.

"The real breakthrough will come when police stop blocking bus lanes themselves and start cracking down on parking placard abuse that makes life harder for bus riders," the study reads.

Mayor Bill de Blasio rode the M14 bus earlier this week, and his staff released some pictures. The mayor called it an extraordinary experience.

Despite the mayor's praise, transportation advocates say there is still work that needs to be done. 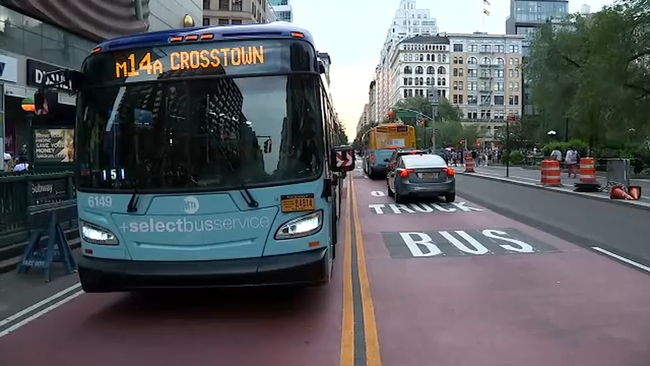