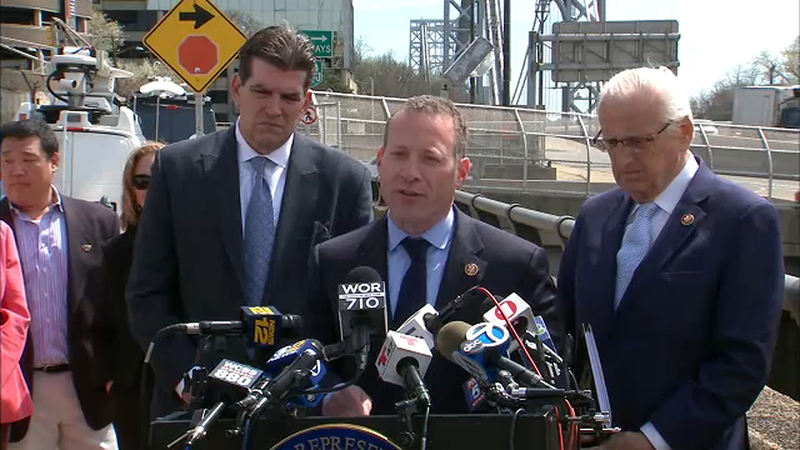 FORT LEE, New Jersey -- New York's plan to charge a fee for motorists entering its congested midtown area won't go into effect for another two years but is already renewing time-honored animosities between the state and its neighbor to the west.

Standing on a bridge overlooking the heavily traveled George Washington Bridge that connects the two states, two New Jersey congressmen on Wednesday variously called the plan "poorly conceived," ''a raw deal" and "a two-by-four to our head."

New York would become the first American city to use so-called congestion pricing to decrease vehicle traffic and fund mass transit improvements, following in the footsteps of London, Singapore and Stockholm. Those cities experienced an initial reduction in traffic and gained a steady revenue stream for public transit.

New York will use the revenue, estimated at up to $1 billion annually, to refurbish its aging and chronically underfunded subway system. The state legislature passed the fee plan this month, but details are far from being finalized.

In response, Democrats Josh Gottheimer and Bill Pascrell on Wednesday outlined legislation, to be introduced by Gottheimer and Republican New Jersey Rep. Chris Smith. The legislation would bar New York from getting some federal transportation grants if it doesn't exempt New Jersey motorists from the fee or, in addition, allow New Jersey residents to deduct the fee on their taxes.

Pascrell said they also sent a letter to Democratic New York Gov. Andrew Cuomo urging him to consider sharing some of the revenue for transit needs in New Jersey.

"Our taxpayers already contribute to the billions in federal transportation dollars that New York subways get every year," Gottheimer said. "Not to mention what many of our residents pay in New York income taxes and what we spend in New York restaurants and in their stores and on their shows. New York just can't come along and take an additional two-by-four to our head, just because they feel like it."

Motorists traveling from New Jersey pay up to $15, if they pay cash, to cross the George Washington Bridge or go through the Lincoln or Holland tunnels into New York. Since both tunnels empty out into the congestion zone, it's expected those commuters will receive a credit for the toll they're already paying.

The George Washington Bridge enters Manhattan further north, above the congestion zone, and motorists there likely won't receive a credit. That raises the specter of thousands of cars shifting from the bridge to the tunnels, both of which already are the site of daily gridlock.

At a separate event Wednesday, Cuomo said the Port Authority of New York and New Jersey, which operates the bridge and tunnels, should implement cashless tolling at those locations to enable that data to be read and an appropriate toll charged when a vehicle enters the congestion zone.

He also downplayed suggestions of an interstate feud.

"There is no New Jersey-New York tension," he said. "We're not calling out the militia, New York navy crossing the Hudson. We don't have a navy."

More than 190,000 cars per day entered New York via the three crossings in January, according to the most recent data compiled by the Port Authority.

Nat Bottigheimer, New Jersey Director for the Regional Plan Association, an urban research and advocacy organization, noted that the fee roll-out, if handled poorly, could have negative effects on drivers and public transit.

"But assuming New Jersey drivers who pay tolls to enter Manhattan are credited somehow for the tolls they pay on bridges and tunnels, New Jersey commuters - the vast majority of whom take bus or rail transit - will benefit from improvements made to MTA or from reduced auto congestion on bus routes across the river," he said in an email.