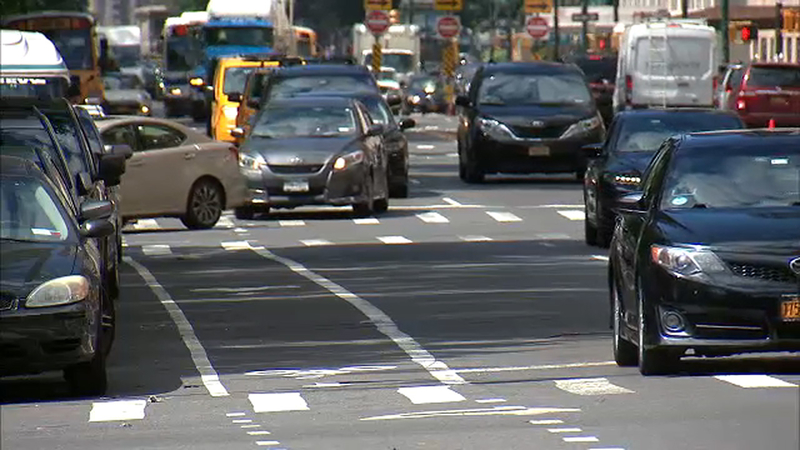 UPPER WEST SIDE, Manhattan (WABC) -- A new bike lane in Manhattan will cost 400 parking spaces on Central Park West and has outraged many in the neighborhood.

Community Board 7 decided overwhelmingly to approve the new bike lane plan at its full board meeting Tuesday night.

The transportation committee unanimously passed a resolution approving the plan to create a protected bike lane on Central Park West.

That means 400 parking spaces will be lost once the plan is implemented.

The bike lane that currently exists is separated from traffic by only a painted line.

Along Central Park West there are four lanes of traffic, plus curbside parking and the narrow bike lane.

"It's not very safe," said cyclist Lisa Aurigemma. "This is a very busy area, lots of people bike here."

And there have been accidents, including a tourist on a bicycle who was killed last summer.

She was hit by a truck when she swerved to avoid a car that pulled out from the curb.

The board will keep the parking spots on the west side, which aligns the buildings, and will keep four lanes of traffic open, two uptown and two downtown.

But it could mean drivers in the neighborhood will find it even more difficult to find parking.

"The vast majority of Manhattanites don't own a car," said Department of Transportation Commissioner Polly Trottenberg. "Most people in the city get around using public transportation, using bikes, walking, using cabs, Ubers and Lyfts. So over time, as the city has grown denser, the mix of vehicles is going to have to change."

The new plan was designed by the DOT to try and make Centra Park West as safe as possible for everyone. Their concern was not convenience.

"What we presented tonight was a balanced plan that is going to increase safety for all roadway users," said Manhattan Borough Commissioner Ed Pincar.

Another controversial aspect to the new traffic pattern involves buses. In the plan, buses will have to cross into the bike lanes to pick up and drop off passengers.

The project will start this summer but will likely not finish until next year.