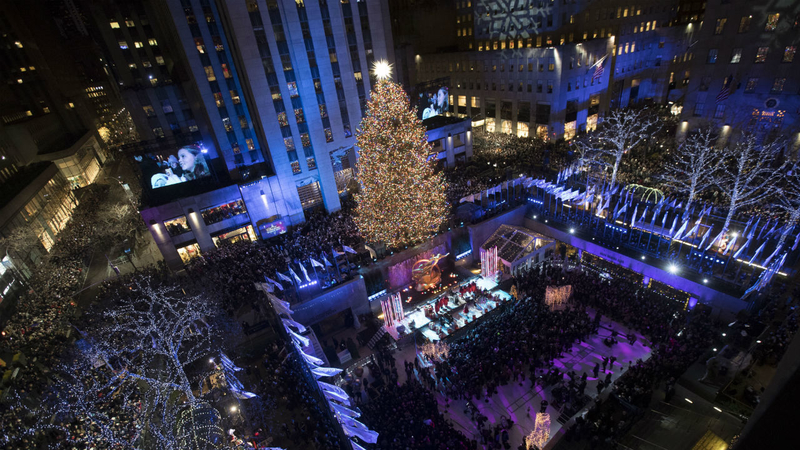 MIDTOWN, Manhattan (WABC) -- With the holidays quickly approaching, New York City officials launched their pedestrian plan Friday to make sure people stay safe and visitors to the city have a wonderful experience.

One attraction people look forward to is spending time in Rockefeller Center to see the tree, go ice skating and take in the atmosphere.

As it has become more popular, more and more people are descending on the plaza, which has created a safety issue.

The city's pedestrian plan took effect in an attempt by officials to address this congestion problem. As a result, there will be street closures in the area as well as a pedestrian-only zone.

Mayor Bill de Blasio says the key to the holiday pedestrian plan is flexibility. Nothing will be permanent, and the zones will be enforced by movable barriers.

No vehicular traffic will be allowed in the pedestrian areas. De Blasio says 49th and 50th streets will be closed between Fifthth and Sixth avenues for most of the day.

The Rockefeller Center closure will be in effect afternoons and evenings, and will start a little earlier on weekends.

Two lanes of Fifth Avenue will be closed, but only at night on weekdays and starting at noon on weekends.

One lane can also be closed on Sixth Avenue, but that will be at the discretion of NYPD and other city officials based on pedestrian traffic patterns.

While the plan is now in effect, the city will continue to keep an eye on the pedestrian flow throughout the holiday to determine what closures are necessary.

When the holidays end on Jan. 2., the plan will be lifted.

"While the MTA fully supports safe pedestrian access for New Yorkers and visitors during this busy holiday time, we are disappointed that the plan put forward by the Mayor gives no priority to MTA buses and ignores the needs of bus customers. This unilateral decision flies in the face of the work that the MTA has done with NYC DOT to speed up bus times, decrease dwell times and increase ridership across our system.

"The plan also lumps MTA buses in with cars and trucks - the exact opposite of our collaborative efforts with the City on the success of the 14th Street busway, the innovative bus lane camera enforcement (ABLE) program and transit priority citywide. Thousands of buses travel these lanes every day getting riders where they need to go for the holidays to see family and friends, and the plan as put forward will only serve to increase congestion and result in slower speeds for our passengers."

City spokesman Will Baskin-Gerwitz responded to the MTA's statement:

"We're glad the MTA shares our goal of safe pedestrian access during the holidays. We've discussed this plan with them numerous times over the last few weeks and only in the eleventh hour did they raise the idea of a dedicated bus lane. Unfortunately, the MTA's proposal would have reduced pedestrian space-the exact opposite of our shared goal."