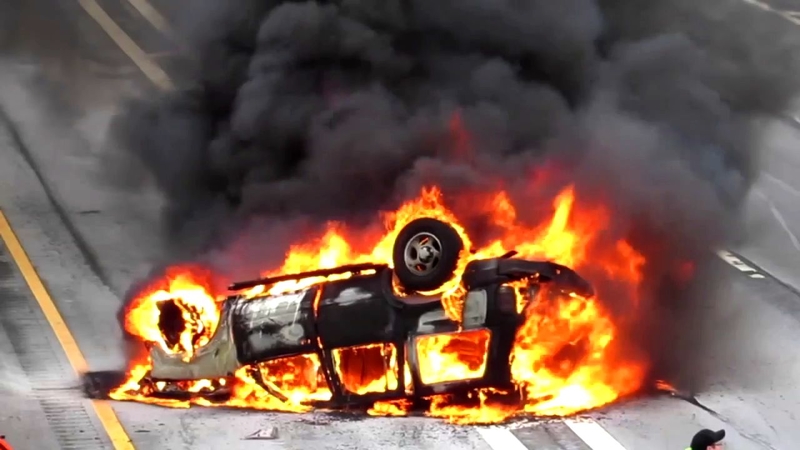 RONKONKOMA, Long Island (WABC) -- A Suffolk County police officer and an Elmont firefighter are being hailed as heroes after they jumped into action to save a woman following a fiery multi-vehicle wreck on the Long Island Expressway Wednesday morning.

The accident happened around 10:50 a.m. near Exit 60 (Hawkins Avenue) in Ronkonkoma.

Authorities say an SUV and a National Grid truck collided in the eastbound lanes, causing the SUV to flip over and catch fire.

Highway Patrol Bureau Officer Thomas Mutarelli and firefighter Jeffrey Dupoux, both off duty, pulled up separately in their own cars.

"The engine compartment just had a small fire at the time," Dupoux said. "But as we were pulling her out, it started to grow."

They managed to remove the woman, 36-year-old Melissa Ortiz, of Yaphank, from burning vehicle.

"The SUV was on its roof, the driver's side door jam was crushed," Mutarelli said. "The woman was inside with a seat belt on, and her neck and head was bent onto the roof of the truck."

Dupoux worked to free her, while Mutarelli focused on getting her out.

"We had no time to try to put the fire out," Mutarelli said. "Mr. Dupoux unleashed her seat belt, I cradled her and pulled her out of the passenger side window."

Ortiz and the driver of the truck, Frederick Foote, were taken to Stony Brook University Hospital with non-life threatening injuries.

"These two men are truly guardian angels who were at the right place, at the right time," Suffolk County Police Commissioner Tim Sini said. "This is truly an act of bravery and professionalism."

"There are no words," she said. "We can only just imagine if she was in the fire. That would've been devastating."