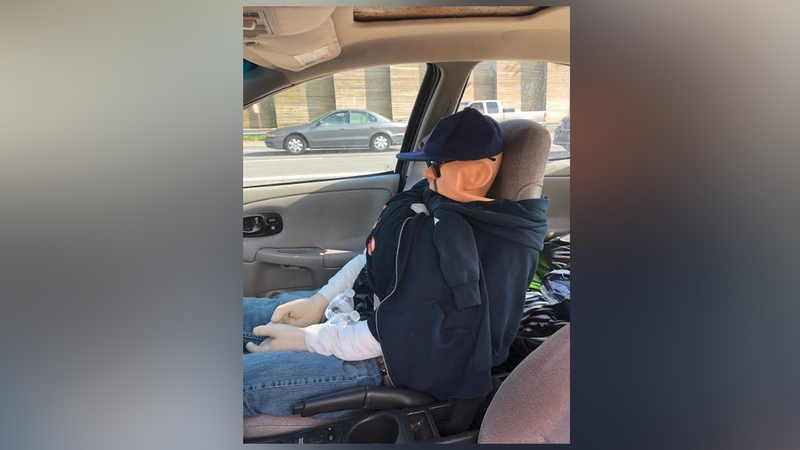 DIX HILLS, Long Island (WABC) -- Police say a man tried to get away with using a phony passenger to drive in an HOV lane on the Long Island Expressway Monday.

According to Suffolk County Police, Highway Patrol Officer Andrew Spina was traveling near exit 51 around 4 p.m. when he became suspicious of the front seat passenger in a 2002 Saturn sedan in the HOV lane.

Spina pulled over the vehicle and found that the driver, 34-year-old James Britt, of Centereach, had placed a mannequin wearing a sweatshirt, sunglasses, hat and jeans into the front passenger seat along with water bottles in an attempt to resemble a person.

Britt was issued a summons for the HOV occupancy violations.

"New York State has set aside the HOV lanes for a specific purpose, and we ask that everyone follow those guidelines. It's not fair for those who are not following the rules, just as I would equate that with every other traffic offense, we ask everyone to be in compliance," said Deputy Inspector David Regina, Commanding Officer of the Suffolk Police Department's Highway Patrol Bureau.

Regina said Officer Spina also nailed a driver who pulled a similar stunt in July 2016 on the LIE also around Dix Hills. The woman had made a dummy out of a pile of clothes topped with a baseball hat and holding a briefcase.

"He must have a knack for this," Regina said of the officer.

Eyewitness News reached Britt by phone Tuesday. He said he would have no comment.

Similar cases have happened from time to time on the LIE. and elsewhere, with police saying drivers deployed phony passengers ranging from mannequins to teddy bears.

In September 2016, a Seattle-area driver was even ticketed for carpooling with a cardboard cutout of then-Republican presidential nominee Donald Trump .