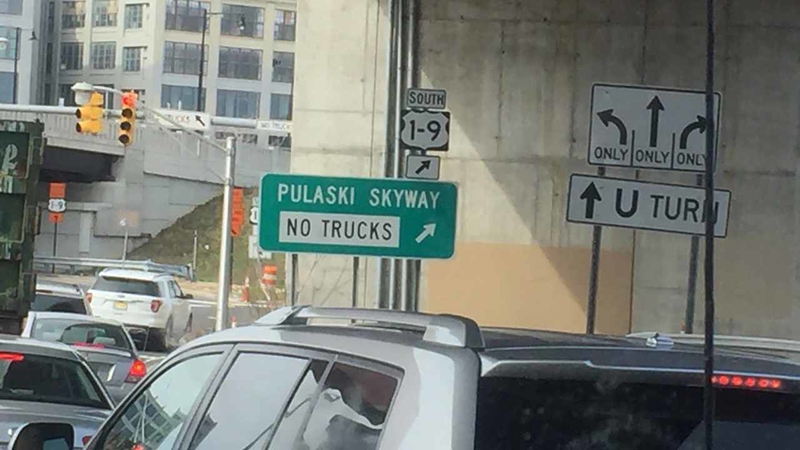 NEWARK, New Jersey (WABC) -- Motorists who use the Pulaski Skyway will have a longer wait before the detour and construction signs come down.
The full reopening of the Pulaski Skyway has been pushed back for a third time until spring 2018. It was scheduled to reopen in summer 2017.

The reopening is delayed while contractors replace the retaining walls between the Skyway and Route 139. A spokesman for the state Transportation Department says the wall reconstruction will extend the life of the corridor connecting Newark to the Holland Tunnel for the next 75 years.

The walls will be replaced at the same time project to install a new bridge deck on the Skyway. Construction is expected to start in late summer.
Inbound traffic has been detoured on the 82-year-old span since 2014, when it closed for repairs.

The Skyway, which carries an estimated 40,000 commuters each day toward Jersey City and the Holland Tunnel into Manhattan - 74,000 vehicles total both ways - needs $1 billion in repairs to what engineers say is a decrepit, crumbling structure.

More delays for the skyway. This is the third time completion of project has been pushed back. What's next? pic.twitter.com/dhFVSPW2YN

The 3.5-mile steel truss bridge, opened in 1932, and is an iconic New Jersey symbol, featured in Orson Welles' 1938 broadcast War of the Worlds, and in the opening credits of the television series The Sopranos.
Transportation Commissioner James Simpson said at the beginning of the construction work that the closure would have a ripple effect on the region, and that while the Pulaski was sound, it had been "structurally deficit" for 35 years.

Here is the full statement from the New Jersey Department of Transportation:

Contract 4, which is the redecking of the southbound lanes of the Pulaski Skyway, is progressing with approximately 90 percent of the existing southbound deck having been removed to date. In addition, new deck panels have been installed on approximately 2.7 miles, or approximately 77 percent of the 3.5-mile long southbound side of the Skyway. In addition to the installation of the deck panels, the contractor still needs to pour the concrete between the northbound and southbound lanes, the center median barrier needs to be constructed, and any remaining curb section, decorative aluminum balustrade, guide rail and lights will need to be constructed on the southbound side. Much of this work is progressing concurrently with the deck panel installation. Once all of this work is completed, an overlay driving surface will be applied to the entire southbound side of the bridge.

While Contract 4 is still under construction with the northbound lanes closed to traffic, NJDOT will be taking advantage of this closure to reconstruct the east end retaining walls as part of Contract 7. These walls, which are between the Skyway and the Route 139 reconstruction (Contract 2), were not originally part of the Skyway rehabilitation. If they are not reconstructed now, they would need replacing in a few years - resulting in future closures, detours, and inconvenience to motorists. Contract 7 has been advanced to get this work completed while Contract 4 is underway to take advantage of the Skyway closure and alternate routes.

Contract 7 was advertised in March and is expected to be awarded in May, with work beginning late summer 2017. Reconstructing these walls now will extend the life of the entire Pulaski Skyway/Route 139 corridor from Newark through Jersey City to the Holland Tunnel for the next 75 years without the need for additional closures or rehabilitation. This work is expected to be completed next spring, at which time the Skyway will reopen to two-way traffic.