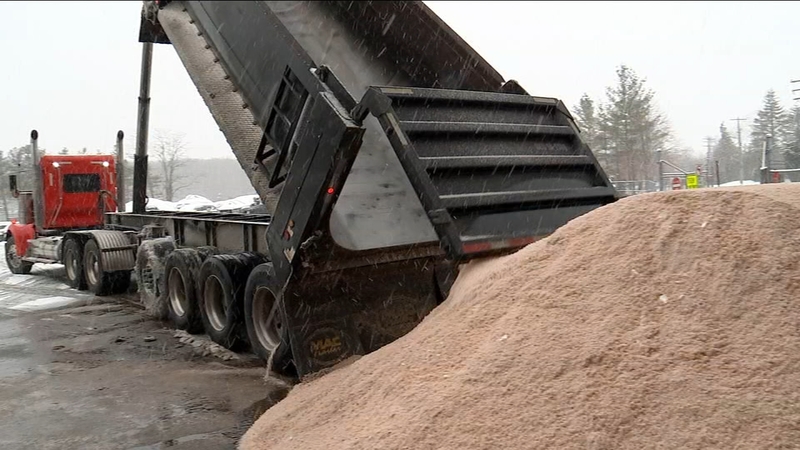 LONG ISLAND (WABC) -- Some municipalities on Long Island are running low on their road salt supply because of a newly enforced weight limitation on the Brooklyn-Queens Expressway.

Orelli said the salt company can only deliver a certain weight of salt every trip.

"We've talked to the salt company and told them, 'Look we'll be here 24 hours. You tell us when you can deliver, we'll be here,'" Orelli said.

Orelli said the Town of Huntington has been accepting salt deliveries on weekends and holidays. The town received a delivery on Thursday afternoon.

Orelli said he does not expect the town to run out of salt completely.

Lee Goldberg has the latest snowfall totals in New York City and the Tri-State area.

Officials in Brookhaven and Riverhead said their salt supplies are running low as well for the same reason.

A spokesperson for the Town of Brookhaven's Highway Department said the town's salt supply is down by a little less than 50 percent.

In Riverhead, highway officials have already begun mixing salt with sand to expand the supply. Officials in Riverhead said they're expecting a 500-ton delivery of salt on Friday or early next week.

Suffolk County has 8,000 tons of salt on hand, which is about half of its supply.

Suffolk County Executive Steve Bellone said the county is speaking with highway officials in New York City to see if the weight limitation rule can be lifted temporarily to allow more salt to flow into the county.

Nassau County Executive Laura Curran said the county is not running low on salt and its supply is more than sufficient.

Salt was needed on the roadways in Suffolk County during Thursday's storm.

Suffolk County Police said between 7:30 a.m. and 12:15 p.m. 92 motor vehicles crashes were reported. The majority of the accidents occurred on Sunrise Highway.

In an accident at 8:10 a.m. on Sunrise Highway in Holbrook, a car overturned after the driver struck the center median. Police arrested the driver, 30-year-old Nestor Hernandez of North Bellport, for driving while intoxicated. A female passenger in the car was transported to the hospital for non-life-threatening injuries. Hernandez and a male passenger were not injured.