WABC
By Anthony Johnson
SECAUCUS, N.J. (WABC) -- Police and firefighters worked to extricate two people from a van following a grisly accident that shut down part of a highway in New Jersey Wednesday afternoon, but one of them later died.

A tractor-trailer struck the overpass and landed on the van, leading to the closure of eastbound Route 3 and causing major traffic delays for hours during the evening rush hour. A large steel structure on the truck tipped over after the collision and landed on top of the van, crushing the front end and slamming it into the barrier. 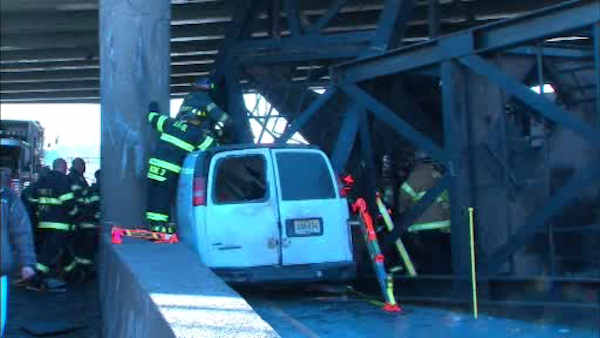 PHOTOS: Route 3 accident
Police and firefighters worked to extricate two people from a van after an accident that shut down part of a Route 3 in New Jersey Wednesday.
The driver and passenger were trapped inside. Police and firefighters worked to free the victims, who were said to be conscious when they were rescued, and both were airlifted to a hospital. The driver of the truck was released from the hospital Thursday morning, but the passenger, identified as 57-year-old Leonard David Bowens, of Newark, succumbed to his injuries.

Now, the survivor is speaking out.

It will take Daultin Banks weeks to fully recover from his injuries. Several ribs were broken, the left side of his body is in pain, his nose in broken and eye is black. But he was the lucky one to survive.

"Just a sad situation, unfortunate incident," he said. "I don't know what to say. There's just hurt behind this whole situation."

Banks says he was trying to go around the flat bed truck carrying the crane, and then there a thunderous bang.

"Everything happened so quick" he said. "I thought I got hit by a train."

Banks knew the damage was bad, feeling trapped and crushed as he and his passenger, 56-year-old Leonard David Bowens, were pinned inside.

"You can't move, you know, panic sets in," he said. "I don't know what's going on. I didn't know what happened until after the fact. I see the crane, I see the roof of the truck caved in, so automatically, I'm thinking about my friend."

Surveying the damage, officials on the scene called it a miracle no one died immediately. But overnight, it turned tragic when Bowens died from his injuries.

There was a massive backup following the crash, and there were also heavy westbound delays due to rubbernecking and one lane closed for emergency vehicles.

Route 3 reopened to traffic around 2 a.m. Thursday after crews worked through the night in Secaucus near Paterson Plank Road to repair the overpass that was damaged in the wreck. One of the biggest concerns was the integrity of the bridge, where a large beam under it shifted 3 feet after being struck.

What appeared to be a large section of a crane straddled three lanes.

"It struck the bridge," Secaucus Mayor Michael Gonnelli said. "It looks like there is some serious damage to the bridge, and then came over on top of this delivery van."

Throughout the rescue, police closed off the normally heavy-traveled roadway.

Gonnelli has been a firefighter for 40 years, and said he had never seen anything like this crash.