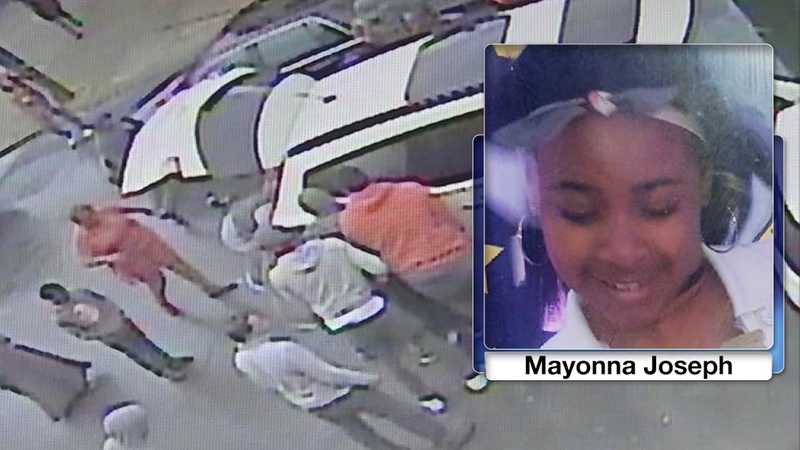 SOUTHWEST PHILADELPHIA -- Bystanders banded together to lift a vehicle off a 9-year-old girl who was struck while crossing a street in Southwest Philadelphia Sunday.

That girl, Mayonna Joseph, was with her sister, 10-year-old Ariana Rivello, and small group of girls crossing the street at 60th and Kingsessing around 6 p.m.

"I was scared, and I almost blacked out," Ariana said.

Ariana says she couldn't help but go into a panic.

"I was trying to pick Mayonna up, just to lift her up, but then it was too late and the car came so fast it went over her," she said.

The driver stopped, but with the vehicle pinning Mayonna beneath the back left tire.

The video shows that it only took a few moments before people begin to gather around the SUV, then begin the effort to lift and move the back end, likely saving the girl's life.
EMBED More News Videos

Raw video: Watch as bystanders lift a vehicle off a child who had been struck in Southwest Philadelphia on May 7, 2017.

One of those heroes is Malachi Thompson. He didn't realize at the time that the little girl beneath the vehicle was a member of his family.

"We all helped, and we finally got it up," Thompson said. "When I finally seen who it was, it was my little cousin. I didn't know what to do."
EMBED More News Videos

Bystanders lift vehicle off child in SW Philadelphia. Dann Cuellar reports during Action News at 11 p.m. on May 8, 2017.

Both girls were quickly transported to Children's Hospital of Philadelphia. Ariana suffered her share of bumps and bruises but, amazingly, she was not seriously injured.

"Doctor says I can't play for a week because of my back. My back really hurts bad," Ariana said.

Mayonna, though, remains in critical condition with severe wounds to her head and chest. Family members say they are still astounded by her composure during this horrific ordeal.

"She was the bravest little girl, she didn't cry or anything. Even in the ambulance she let them do what they had to do for her. But she's in a lot of pain though," said her aunt, Ishtar Gadson.

A five-year-old girl inside the SUV was also injured, but no details have been released.

Police say the 46-year-old woman who was behind the wheel has been cooperating with the investigation.