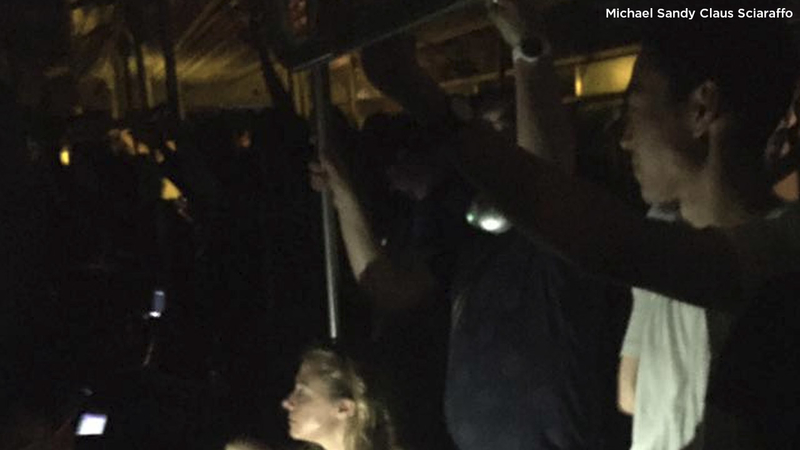 NEW YORK (WABC) -- New York City subway riders are sounding the alarm after yet another incident that affected service, this time leaving a train full of straphangers stranded on a hot, stalled F train.

A packed F train lost power between stations in Lower Manhattan Monday evening, causing the air conditioning to go out and tempers to flair. The riders were trapped in their subway cars for about 45 minutes, before workers were able to inch the broken train to the next station.

People have since shared their thoughts about the F train:

F train subway riders stuck underground for over an hour without lights or AC. Well, now we know what the "F" stands for.

Guess we know what the F in F train stands for, huh?! F us, right?! #clearlylosingmymind

Others described the incident as a nightmare.

The MTA said it's not sure yet what caused the train to lose power -- and it's looking into it.

But the MTA is also looking into the communication about the incident, and what train operators communicate to passengers. One passenger said the subway worker kept saying the train was being held due to "train traffic."

"Half the time we don't believe what they're saying, so there needs to be some better communication going on," Leslie Engel said. "Honesty would be the best thing."

Another rider called the "traffic traffic" announcement a "common lie."

The MTA's response is that it's working to prevent issues as bad as this one:

"While the rail control center and service supervisor responded promptly to this problem, we need to continue to push to minimize both the frequency and the duration of system failures and delays."

Monday's problems are among a series of power and service-related issues plaguing the MTA's subway system in recent weeks. Here's a rundown of stories we've covered: