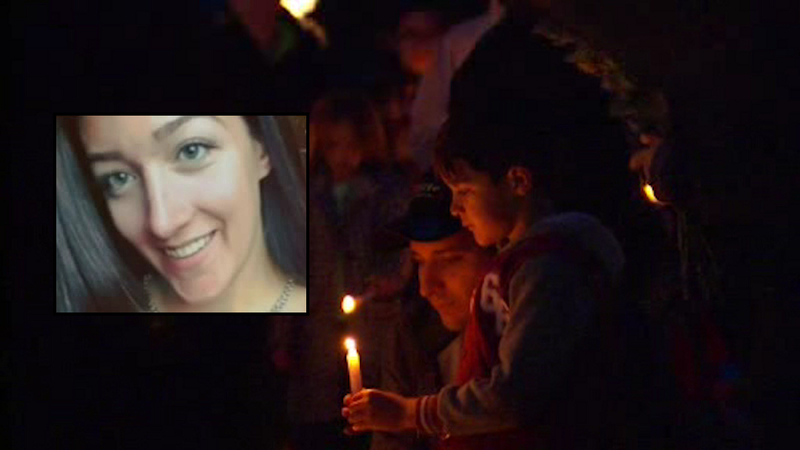 EAST ISLIP, Long Island (WABC) -- A young mother walking her dog was killed when she was struck by an out-of-control car in East Islip Tuesday morning. Tuesday night, her son helped relatives write notes to his mom, and left them at a makeshift memorial that grows now where she died.

It was a wrenching moment in a day of unceasing grief.

The East Islip Fire Department says 25-year-old Skye Brunetti was on the sidewalk when the car lost control around 9 a.m. on Union Boulevard, jumped the curb and struck her and a utility pole.

Brunetti, who was heading home after putting her 5-year-old son on the school bus, was pronounced dead at the scene.

"She was the best person you could ever think of," brother TJ Lindner said. "And I loved her a lot."

Investigators believe she had her back to traffic and may not have even seen the car coming. The dog was also killed.

"Wonderful mother, did everything for her son," friend Angela Abbatiello said. "She was always there for her son. She stayed home. She did what she had to do as a parent. She was great."

The driver, 50-year-old Barbara Cottone, was rushed to Southside Hospital in serious condition.

Suffolk County police say Union Boulevard was shut down in both directions for the accident investigation.

PSEG Long Island is responding to repair the electric pole that was knocked down. About 45 customers were affected, and the crew is working to restore power.

The vehicle was impounded for a safety check. Anyone with information is asked to call the Third Squad at 631-854-8352.