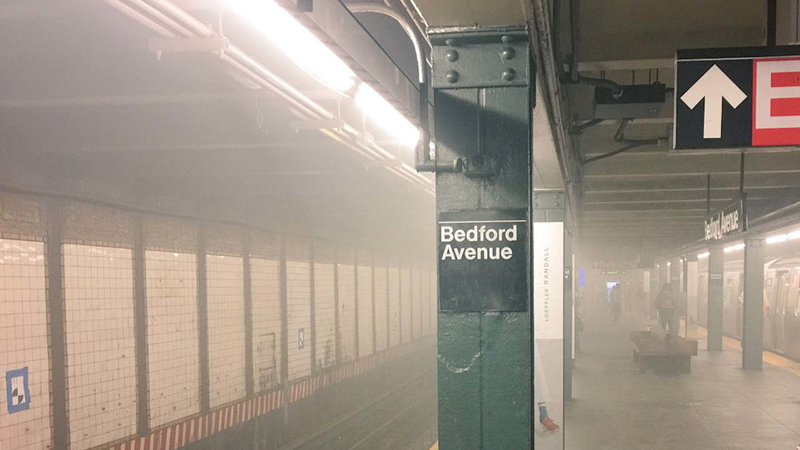 EAST VILLAGE, Manhattan (WABC) -- L train service is running again between Brooklyn and Manhattan after a Thursday morning fire in the tunnel beneath the East River.

The incident began just after 9 a.m., and it wasn't until around 5 p.m. that service between Bedford Avenue and First Avenue was restored with extensive delays in both directions.

If you were hoping to get into the city on the L this morning, abandon hope #Ltrain #subwayfire #mta #nycsubway pic.twitter.com/IvmtTvsaCy

There were no trains stuck in the system and no evacuations, but heavy smoke billowed throughout the tunnel and several stations.

"I saw some yellow smoke coming up through the vents, I know these vents are from the L train that run under 14th Street," eyewitness Edwin Rodriguez said. "After the yellow smoke came up, it started coming up black."

Another pleasant morning commute with your train car filling up with smoke and ur in the east river tunnel #LTrain pic.twitter.com/G7OJ4NT6x7

Authorities say there was a fire in the wall of the Brooklyn-bound tunnel, in an underground MTA vault several grades below street level.

"Our companies had to make their way down five steep flights of stairs to the track level of the L train, where they determined that we had a vault, an electrical vault was on fire," Deputy Assistant Chief Michael Gala said.

It took about 45 minutes for firefighters to extinguish the flames and get the situation under control, but the damage was done.

There were reportedly two minor injuries related to the incident, a firefighter who suffered smoke inhalation and was brought back up on a stretcher and a commuter on the Brooklyn side.

Fire on the L train at 1st Ave. Firefighters headed in. pic.twitter.com/V5sH0sGQ4o