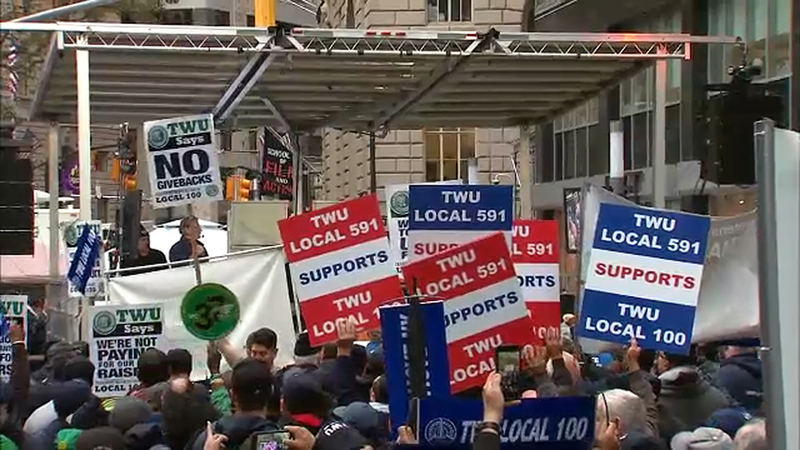 Members of Transport Workers Union Local 100 filled Lower Broadway for three city blocks, from bus drivers and subway operators to station cleaners and track inspectors. All of them, working without a contract for nearly six months.

"They can shut this system down," said TWU International President John Samuelsen. "The local is not talking about a strike. But look up and down the block. There's nothing but anger here."

Both sides first met face-to-face in April. And to date, union leaders claim members have been offered raises of just two percent.

"All those raises are based on givebacks," said TWU Local 100 President Tony Utano.

Conductors and train operators make between $65,000 and $75,000 a year in base pay, although the average transit worker makes less than that.

MTA officials claim they have been bargaining in good faith. But unionized workers from the Long Island Rail Road and Metro North are also working without contracts.

"They made a big mistake, and that mistake was they united the labor movement," said LIRR Union General Chairman Anthony Simon "I'm proud of that and if they want a fight, they picked the wrong people to fight with."

After so many months, transit workers say they needed this rally. But what they really need is a contract.

This may bring the members together, but it doesn't bring them closer to a deal. Both sides have not met face-to-face in two weeks.