WABC
POINT PLEASANT BEACH, N.J. (WABC) -- The Fourth of July getaway is in full swing, with residents throughout the Tri-State Area hitting the beaches, boardwalks and roads.

Despite clouds and a chance of rain on Saturday, towns across New York, New Jersey and Connecticut are gearing up for holiday celebrations. Those seeking fun in the sun flocked to beaches along the Jersey Shore, Long Island and Coney Island.

Asbury Park's beach is still unfolding into its own character, working to attract more families with things like the kid's Splash Park and making it easier for visitors to by adding more than 900 parking spaces, mostly near the boardwalk.

"I love it," beach-goer Jeri Zhou said. "I love the fact that everyone's coming out just enjoying the beautiful weekend in the spirit of independence."

Carving out a spot on Jones Beach was difficult, especially for those who wished they could reserve a prime spot a day in advance.

Record crowds expected for the first Jones Beach fireworks show in six years, with budget constraints primarily getting in the way since 2009. 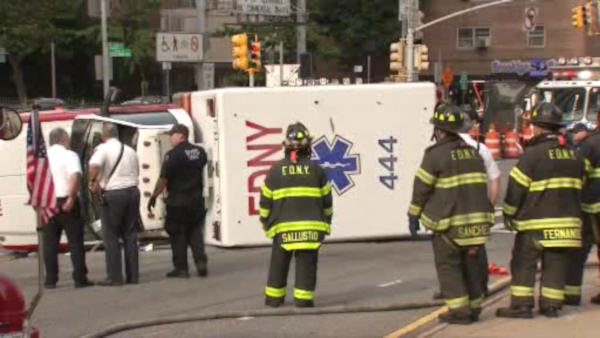 Ambulance overturns in Downtown Brooklyn; 4 people injured
The ambulance collided with an SUV Friday evening as it was heading south off of the Brooklyn Bridge. The ambulance was responding to a motor vehicle accident at the time.

"It's going to be amazing," said George Gorman, of the New York State Department of Parks. "We're expecting large crowds. We're asking everybody get here as early as you can."

Independence Day is one of the three summer driving holidays, but mass transit in the area is working to accommodate travelers, too. New Jersey Transit has extra buses and trains ready, with getaway service is available on the Northeast Corridor, North Jersey Coast, Raritan Valley, Midtown Direct, Pascack Valley and Port Jervis lines.

Buses were also leaving early from the Port Authority terminal and from the Hudson River waterfront.

The LIRR is also offering plenty of extra train service to the East End over the extended weekend, including an extra Cannonball to Montauk.

Staten Island Railway is prepared to add additional service prior to and after the fireworks, as needed.

Open alcohol containers will not be permitted on any of N.J. Transit's s services on July 4.