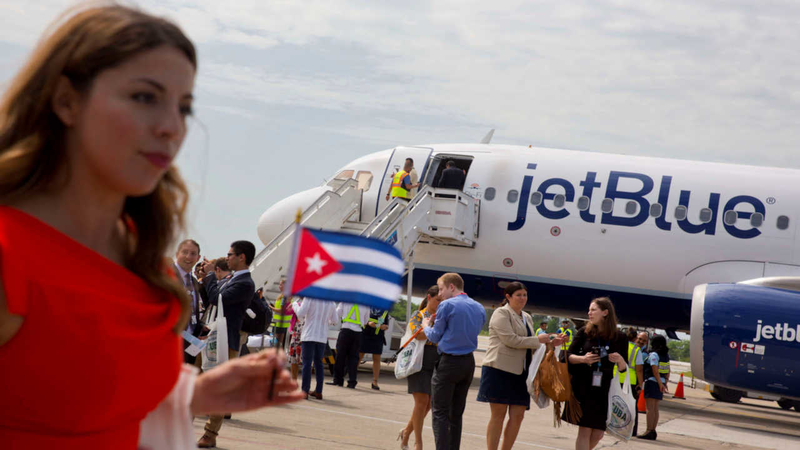 Passengers erupted into applause as the JetBlue flight from Terminal 5 landed in Cuba, arriving as the island begins week-long memorial services for revolutionary leader Fidel Castro. Havana also happens to be the carrier's 100th destination.

Commercial air service launched once again between other U.S. cities and Cuba over the past few months, and nine airlines plan to have service to the island up and running soon.

"I think it's a beautiful country," he said. "There's a lot of history there. I'm just excited about the African history."

Onyia planned his trip two weeks ago, but he's been waiting a lifetime to visit the island nation.

"Something I wanted to do but I didn't have the opportunity as an American to go," he said. "So President Obama gave us the opportunity to go down there and I just want to explore."

Gabriella Gonzalez is going for her third visit.

"It's just one of those places you have to see at some point in your life," she said.

And Tony Genchi, an American, has worked in Cuba for 20 years.

"Cuba is a unique country," he said. "It's a unique experience. People are very nice, very warming."

Havana is now JetBlue's fourth destination in Cuba. The airline had planned an early-morning party with a band and dancers to celebrate the inaugural flight, but the plans were canceled after Castro's death.

"We will acknowledge the mourning of the nation, as well as our celebration in a more respecting way," JetBlue spokesperson Giselle Cortes said.

Also Monday, the first regularly scheduled flight to Cuba's capital in more than half a century left Miami International Airport bound for Havana.

Monday morning's flight was the first of the new Havana-bound service and the first of four daily flights American Airlines plans out of Miami International.

The flights were made possible under newly restored ties between Cuba and U.S. President Barack Obama's administration.