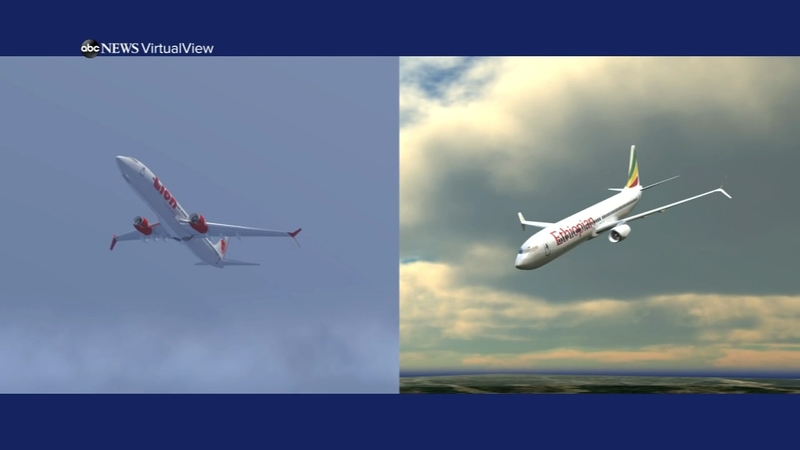 PARIS -- The French civil aviation investigation bureau BEA has concluded there were "clear similarities" between this month's crash of an Ethiopian Airlines Boeing 737 MAX plane and a Lion Air plane crash last October.

The French bureau said Monday that black box data from the Ethiopian Airlines flight showed the links and will be used for further study.

Ethiopian authorities asked BEA for help in extracting and interpreting the crashed plane's black boxes because Ethiopia does not have the necessary expertise and technology.

The news shattered more than two years of relative calm in Africa's skies. As millions on the continent headed to church on Sunday morning, an Ethiopian Airlines plane took off on

The Ethiopian Accident Investigation Bureau intends to release a preliminary report within 30 days.

On Sunday, Ethiopia's transport minister said preliminary information from the flight data recorder of the Ethiopian Airlines plane that crashed a week ago and killed 157 people shows "clear similarities" with the Lion Air plane crash.

The disclosure came as thousands marched in the capital of Addis Ababa, accompanying 17 empty caskets at a funeral for the Ethiopian victims of Flight 302. The caskets were empty because authorities have said that recovering and identifying the remains will take months.

The crash of Ethiopian Flight 302 on March 10 and that of a Lion Air plane in Indonesia in October - both of them Boeing 737 Max 8 jetliners - have prompted the United States and other countries to ground the aircraft.

The flight recorders from Flight 302 that went down shortly after takeoff from Addis Ababa for Nairobi were recovered "in a good condition that enabled us to extract almost all the data inside," Transport Minister Dagmawit Moges told reporters.

Moges did not elaborate on what the similarities were.

The U.S. Federal Aviation Administration already has said satellite-based tracking data showed that the movements of Flight 302 were similar to those of Lion Air Flight 610, which crashed off Indonesia, killing 189 people.

Both planes flew with erratic altitude changes that could indicate the pilots struggled to control the aircraft. Shortly after their takeoffs, both crews tried to return to the airports but crashed.
Suspicions emerged that faulty sensors and software may have contributed to the crashes.

Moges said the Ethiopian government intends to release detailed findings within a month.

At the memorial service earlier in the day, some of the relatives who marched behind the flag-draped coffins were overcome with grief and fainted.

The service came one day after officials began delivering bags of scorched earth from the crash site to family members of the victims because of the problems with identifying the remains.

Family members said they were given a 1-kilogram (2.2-pound) sack of dirt from the crash site. Many relatives already have gone to the dusty field outside Addis Ababa where the plane went down to pay their respects.

Mourner Elias Bilew said he had worked with one of the victims, Sintayehu Shafi, for the past eight years.
"He was such a good person," Bilew said. "He doesn't deserve this. He was the pillar for his whole family."

Boeing Boeing Chairman, President and CEO Dennis Muilenburg issued a statement Sunday saying, "First and foremost, our deepest sympathies are with the families and loved ones of those onboard Ethiopian Airlines Flight 302.

Boeing continues to support the investigation, and is working with the authorities to evaluate new information as it becomes available. Safety is our highest priority as we design, build and support our airplanes. As part of our standard practice following any accident, we examine our aircraft design and operation, and when appropriate, institute product updates to further improve safety. While investigators continue to work to establish definitive conclusions, Boeing is finalizing its development of a previously-announced software update and pilot training revision that will address the MCAS flight control law's behavior in response to erroneous sensor inputs. We also continue to provide technical assistance at the request of and under the direction of the National Transportation Safety Board, the U.S. Accredited Representative working with Ethiopian investigators.

In accordance with international protocol, all inquiries about the ongoing accident investigation must be directed to the investigating authorities.