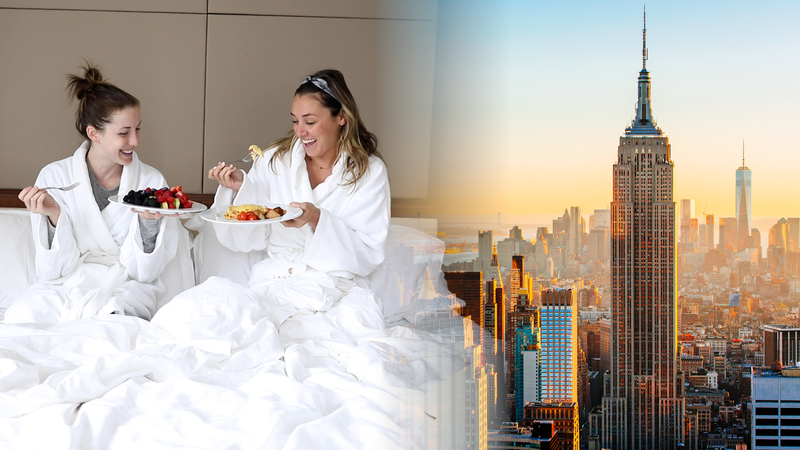 NEW YORK CITY (WABC) -- As we all know, the only upside of the Tri-State Travel Advisory is that parts of New York - that were previously unattainable to locals because of their supreme attraction to tourists - are now a lot less crowded!

Wouldn't now be a great time to act like a tourist in New York City without all the... well, tourists?

Attractions that native New Yorkers would never consider visiting are now easier than ever to visit... and it turns out they are a lot of fun!

We decided we needed a little getaway - and because we are best friends currently living in Long Island City and not able to be in Manhattan for work - so this was the perfect time to book a night at one of the top hotels in Manhattan.

The Langham New York is a modern, luxury 5-star hotel with the ultimate location on Fifth Avenue. The limestone tower that soars 60-stories into the sky is located between Bryant Park and the Empire State Building.

In response to the coronavirus pandemic, The Langham Hotels & Resorts have implemented stringent precautionary measures at all hotels, which will continue to ensure the safety and well-being of all guests as much as possible. Check-in was a breeze, with hand sensors to open every door, sanitizing stations around every corner, and social distancing reminders in the public guest areas.

After we checked in, we headed to the Empire State Building to use our two VIP passes that came with our room. The team at Empire State building took it further to show our viewers their most luxe experience - the all-access tour!

When we arrived we were greeted and escorted (after temperature checks of course) to their celebrity green room - the exclusive space where we welcome the building's most famous guests. There you can check out photos and memorabilia from former celebrity visitors, or just lounge in style and celebrate with a glass of champagne!

As first-timers ever to the Empire State Building (even as New Yorkers - yes, we know that's crazy) we got to experience a private, guided tour - skipping the lines on our way to the top to soak up New York's most famous view.

We started our tour here in the new Observatory entrance that opened in August of 2018. The entrance lobby features signage in multiple languages, a new lighting ceremony area, and a two-story model of the Empire State Building, completely to scale!

Empire State Building has an average of 4 million guests per year. While the majority of those people come in and go straight up to experience the incredible views on the 86th-floor Observation Deck for the views of NYC, it is Empire's history that really sets them apart from the rest. Empire State Building stands officially at 1250 feet tall, 102 stories, and sits on 2 acres of land. The building was completed in 13 months on May 1, 1931.

During our tour, our tour guide started us off in the basement of the building where we got a little bit of insight into the operations side of our building. The vault we got to stand in, was built for the bank that had occupied the second floor.

Immerse yourself in the Empire State Building story on your way to the top - with exhibits located on the 2nd and 80th floors. The exhibits share numerous remarkable facts as well as reproductions of nostalgic photos and mementos of the more than 3,400 workers who helped create history. Documents include stunning period photographs, architectural sketches and renderings, construction notes, and daily bookkeeping documents.

We got to experience all of the exhibits on our way through the building. Like a black-and-white panoramic image that depicts the site of the original Waldorf-Astoria Hotel as construction of the Empire State Building begins.

You feel as if you are in the middle of the action, surrounded by iron workers and masons shouting over the din of machinery, moving steel beams into position, and tossing hot rivets into place. The Modern Marvel exhibit outlines the specific measures taken to make the Empire State Building a world leader in sustainability and a leading example in energy efficiency.

Then we took a short elevator up to the 86th floor Observatory. Visitors reach the 86th Floor Observatory by elevator in less than one minute! It's the iconic outdoor deck that most people are familiar with from movies such as "Sleepless in Seattle" and most recently the Tom Cruise film "Oblivion." On the clearest of days, visibility from the Observatories is 80 miles, with five states in view - New York, New Jersey, Pennsylvania, Connecticut and Massachusetts.

Then... we went up even higher to the mooring mast, which contains a metal staircase, a section of the Empire State Building's famous three-tiered lights, and an elevator that lifts visitors to the 102nd floor Observatory for a bird's eye view of New York City and surrounding states.

We ended our tour in the iconic, main lobby that truly wows the public with art deco glamor. The original 3-story, hand-painted ceiling mural consisted of 23k gold, aluminum sheet hand-painted onto a canvas. In 1961, the new owners of the building felt the building as a whole was outdated and needed to be modernized. They had the mural painted over, installed florescent lighting and covered with acrylic drop ceiling... as a cost saving measure - OUCH! In 2009, they restored the ceiling as a replication. The ceiling replication took 2.5 years to make and unveiled in 2009 when the drop ceiling was removed.

If you have never been to the Empire State Building - now is the time to check it out! It was an incredible tour and was not very busy, so you can even get uninterrupted selfies!

When our tour was over, we walked to lunch - a stone throw away from our hotel - at Bryant Park Grill in the fabulous Bryant Park. With a quick stop to a souvenir shop right outside of our hotel - where we obviously bought the infamous 'I Love New York' shirts to really feel like tourists. After a quick rest and getting all glammed up, we headed to dinner!

Langham Hotel's famous restaurant, Ai Fiori, is temporarily closed due to the indoor dining restrictions, but their sister restaurant, Marea, is offering outdoor dining. Marea is located by Central Park South and boy - is she a BEAUTY! Marea Under the Sea, the outdoor patio designed by Nusla Design and Floratorium, reimagines scaffolding by creating a European oasis on the sidewalk. The meal was AMAZING!! They brought us out some of their top seasonal dishes - like the Nova Scotia lobster burrata salad, grilled octopus, and 14oz prime grilled sirloin with bone marrow Panzanella. They even accommodated for Emily - who is not a fan of seafood - making every dish seafood-less. Jo claims Marea had the "best tiramisu of her entire life' and some of the "best seafood she's had in the city".

We got our beauty sleep and a much-needed rest in our beautiful room back at the Langham and completed our stay with in-room breakfast.

This was such a blast to do a staycation right in our own city! While the rumors are saying 'New York is dead', we highly encourage you to take advantage of the many, exclusive staycations The Langham has to offer. Find out more on their website.
Report a correction or typo
Related topics:
travelnew york citynew yorkmidtownmanhattancentral parkbryant parktravelin our backyardstaycationtravel tipscentral parkstay at home ordersocial distancingempire state buildingnew york cityhotelmuseumstouristmuseum exhibitnyc parksrestaurantsholiday traveltourismoriginals
Copyright © 2021 WABC-TV. All Rights Reserved.
More Videos
From CNN Newsource affiliates
TOP STORIES