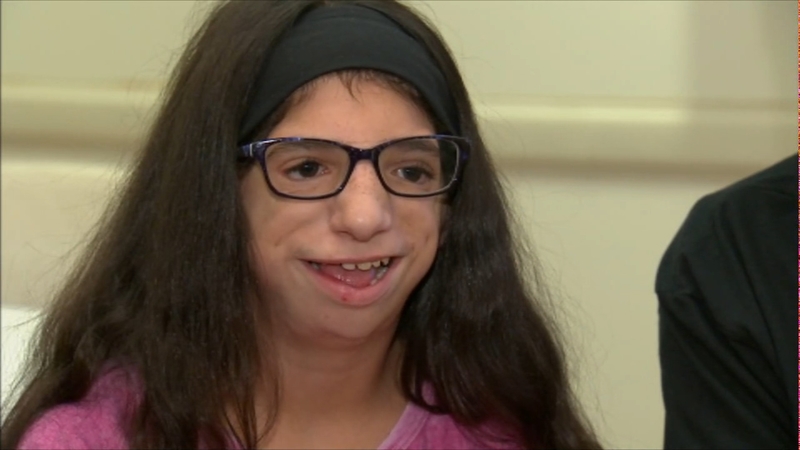 NEW YORK (WABC) -- The star-studded film "Wonder" is getting a lot of Oscar buzz this time of year.

The movie, based on the best-selling book of the same name, tells the story of 10-year-old August Pullman, who faces uncertainty after living much of his life out of the public eye.

"Auggie" was born with a severe facial malformation, but his case is not unique.

One middle school student from Long Island is hoping "Wonder" can raise awareness and understanding for children living with disabilities.

It is the kind of story that makes us all "Wonder" about acceptance, bullying and those who aren't ordinary.

It is Hannah Klein's story each and every day. She's 12-years-old and like Auggie in the book and movie, Hannah has the genetic condition known as Treacher Collins Syndrome, affecting her tissue, her muscles and bones in her face.

"I want people to know that I'm not like...weak," Hannah said.

No she is not. She is actually tough as nails.

After all, middle school can be rough.

The rest of her family is pretty tough as well, but watching the new movie it did bring on some tears.

You see, like Auggie, Hannah has had more than 20 surgeries. Also like Auggie, she has overcome enormous challenges.

What's even more interesting, is Hannah's diagnosis was a revelation for her whole family.

They learned her older sister also has a more mild case of Treacher Collins, which they both got from their dad.

He didn't know he even carried the genetic mutation, until after Hannah was born.

"And the few times Hannah's been bullied on social media, I shamed the kid who did it," said Stacy Klein, Hannah's mother.

"I have friends that actually care about me, instead of like, the haters. Haters gonna hate," Hannah said.