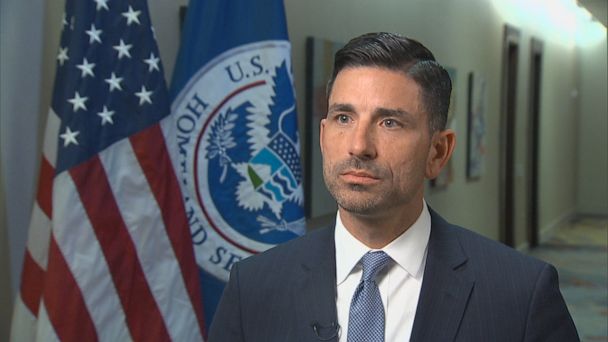 President Donald Trump said on Tuesday he will nominate Chad Wolf to be the permanent Secretary of Homeland Security.

Wolf has been acting secretary since November and his tenure has been controversial, most recently in his role carrying out Trump's orders to use federal agents to respond to violent protests in Portland, Oregon.

"I am pleased to inform the American Public that Acting Secretary Chad Wolf will be nominated to be the Secretary of Homeland Security. Chad has done an outstanding job and we greatly appreciate his service," Trump tweeted.

Two weeks ago, a government watchdog agency found that Wolf and his acting deputy, Ken Cuccinelli, were named to their current roles illegally, in violation of the Vacancies Reform Act, in part because they had not faced Senate confirmation.

In response to a letter from DHS which called the ruling "baseless and baffling," the Government Accountability Office reaffirmed its decision that the two top DHS officials were serving illegally.

Democrats had demanded they resign, and on a call with reporters Tuesday, Senate Minority leader Chuck Schumer blasted the decision to nominate Wolf.

"I think given his past action he's an awful choice," Schumer said.

Wolf has been a loyal advocate of President Trump's hardline immigration agenda from the long-promised southern border wall to more recent restrictions on unauthorized border crossers.

Since the outbreak of the coronavirus pandemic in late March, Homeland Security continues to enforce a series of travel bans barring entry from COVID-19 hotspots as well as separate restrictions on visa applicants

At the southern border, migrants without papers are immediately turned back with fewer opportunities to claim asylum out of fear of returning to their home country.

Last week, the American Civil Liberties Union filed a legal challenge against the policy on behalf of minors who faced swift deportation under the new measures. It marked the organization's 400th legal action against the administration, many of which have directly named Wolf.

"This appointment is a sham, and Chad Wolf is a danger to our democracy," said ACLU deputy director of immigration policy Andrea Flores in response to news of his proposed nomination.

Wolf and other Homeland Security officials have defended the fast-track "expulsion" protocols as a necessary public health measure, designed in part they say, to limit COVID-19 transmission between migrants and border officers.