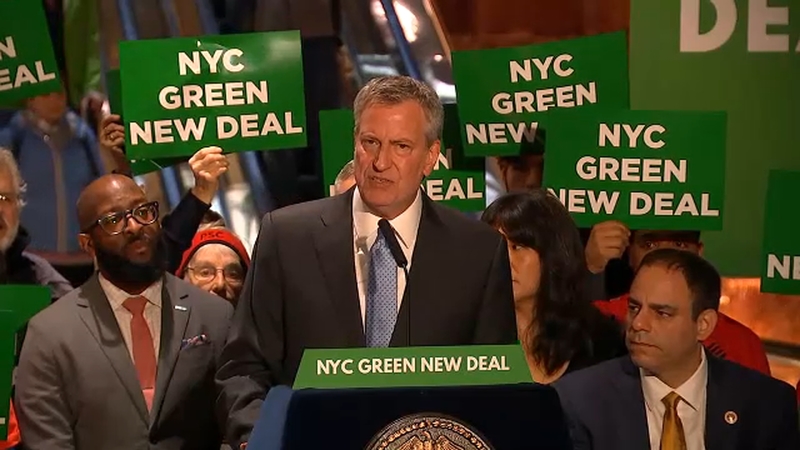 The law takes effect on May 17, 2019 and is a central component of New York City's Green New Deal, which de Blasio says will create new jobs and build a fairer and healthier city by making the city carbon-neutral by 2050.

According to the mayor, Trump owns at least eight large buildings in the city that do not meet 2030 emissions levels under the law and would owe approximately $2.1 million in fines every year starting in 2030.

"Our message is loud and clear," de Blasio said. "We're tackling climate change head-on with NYC's Green New Deal and are the first city in the world to require all big buildings to cut their emissions, with the goal of a carbon neutral city by 2050. President Trump - you're on notice. Your polluting buildings are part of the problem. Cut your emissions or pay the price."

De Blasio says reducing emissions from buildings is a key strategy for implementing the city's Green New Deal and upholding the highest goals of the Paris Agreement to limit global temperature to 1.5 degrees Celsius.

He says the plan attacks global warming on all fronts and is comprised of $14 billion in new and committed investments, legislation and action at the city level that will ensure a nearly 30 percent additional reduction in emissions by 2030.

In addition to the building mandates legislation, it includes other initiatives to reduce emissions, a plan to switch city government operations to clean electricity, banning new inefficient glass buildings, and committing the city to carbon neutrality by 2050.

Buildings are responsible for nearly 70 percent of all greenhouse gas emissions in New York City, and officials say cleaning up the city's largest buildings will promote energy efficiency, electrification, and renewable energy while creating new, good-paying jobs for New Yorkers.