Growing concerns about traffic and security in area around Trump Tower 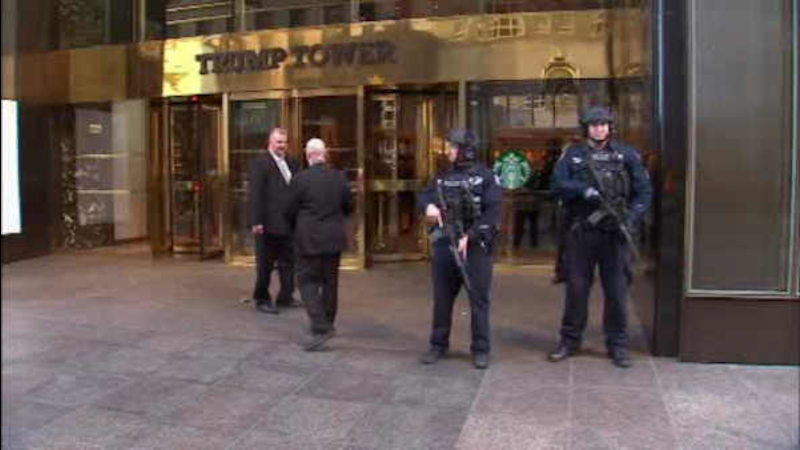 Growing concerns about traffic and security in area around Trump Tower

MIDTOWN, Manhattan (WABC) -- Concerns are growing about traffic and security in the area around Trump Tower in Manhattan, the home of the President-elect.

It's also the headquarters of Donald Trump's presidential transition team.

People who live in the neighborhood are already seeing the impact.

There is a heavy security detail outside the building, and Fifth Avenue is blocked off between 56th and 57th Streets, with checkpoints on the street and a no-fly-zone above.

"It's amazing that all my friends and colleagues and my business associates are calling me daily, how am I surviving," said Trump Tower resident Norman Horowitz.

The 58-story building now has around the clock Secret Service detail.

Armed NYPD counterterrorism officers are at the front entrance, and concrete barricades have replaced the large sanitation trucks that were in place Thursday.

"It's the inconvenience of having to walk around three blocks, four blocks to come in at night," said Horowitz. "Once you say you're a resident they let you in, not a problem. But there are no deliveries that can come in. It just upsets your schedule."

But the atrium of the mixed view skyscraper is still public space, attracting tourists who now have to go through checkpoints to get inside.

"It's just the level of security, there were two or three checkpoints and also the airport-type security when you came in, the machines," said John Sheahan, a tourist from Philadelphia.

"We are working closely with the Secret Service to come up with a long-term plan to make sure that it has as minimal effect on New Yorkers, because that's a busy spot, 56th and Fifth," said NYPD Commissioner James O'Neill. "We have to make sure we have security but also ability for New Yorkers to go about their business."

So at least until an official move to the White House, there will be concrete barricades in front of the building, some street closures, and NYPD officers on the surrounding blocks keeping a tight grip on anything that moves in order to secure the President-elect.