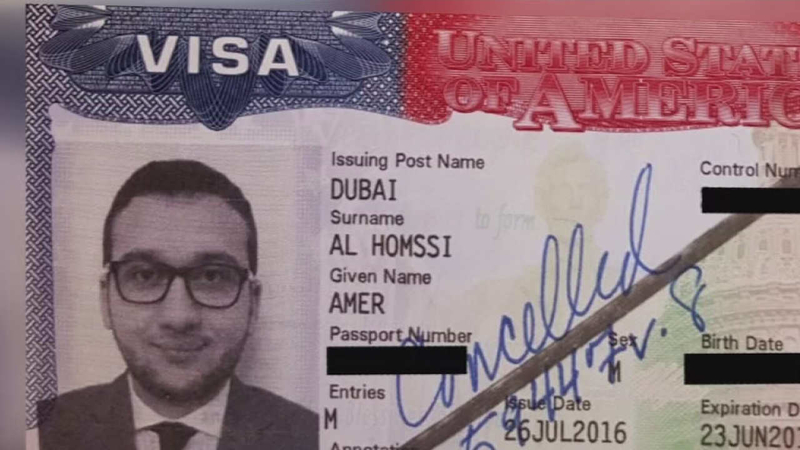 CHICAGO, Illinois -- A doctor stranded overseas by the travel ban imposed by President Donald Trump is taking on the president.

Dr. Amer Al Homssi, of Chicago, said he is "collateral damage" in Trump's immigration order, and is stranded in the Middle East where he traveled to get married 10 days ago. When the University of Illinois - Chicago doctor tried to return to the U.S. on Sunday, he said American authorities overseas blocked him from boarding the plane home.

Al Homssi, 24, was at Abu Dhabi International Airport in the United Arab Emirates, heading home to Chicago where he works at Christ Hospital in Oak Lawn as an internal medicine resident through his program at UIC. Al Homssi is a Syrian native who holds a UAE passport and an American J-1 student visa.

On Sunday, when Al Homssi got to the check-in area for U.S. residents and visa-holders, the trouble began. Instead of processing him through for the flight home, Al Homssi said that he was ordered into secondary security screening where he voluntarily turned over his cell phone and other personal belongings. A short time later, U.S. officers informed him he wasn't going anywhere because of Trump's executive order banning immigration from seven Muslim-majority nations, including Syria, where he was born.

"Classic insanity. I mean, it's just so ignorant and stupid. I don't understand it. I'm just embarrassed that my country would do something like that," said Thomas Durkin, Al Homssi's attorney.

The suit states that Al Homssi's "dreadful consequences...are the result of his being a member of the Muslim faith that is now being treated differently in the United States."

As a result of the policy, Al Homssi's American visa, his ticket back into the U.S., has a cancellation notice on it that was handwritten by an American Homeland Security agent in Abu Dhabi, preventing him from returning to Chicago.