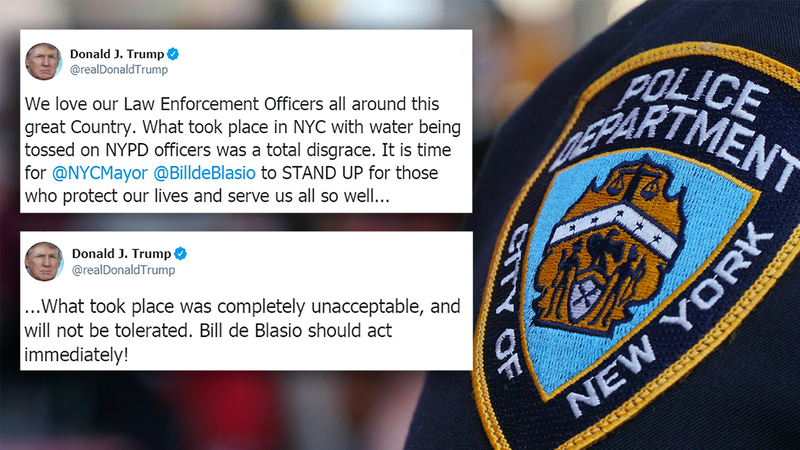 NEW YORK -- President Donald Trump added his voice Thursday to the chorus of people upset about videos showing New York police officers getting drenched with buckets of water during a heat wave.

"What took place in NYC with water being tossed on NYPD officers was a total disgrace," Trump wrote on Twitter. "What took place was completely unacceptable, and will not be tolerated."

We love our Law Enforcement Officers all around this great Country. What took place in NYC with water being tossed on NYPD officers was a total disgrace. It is time for @NYCMayor @BilldeBlasio to STAND UP for those who protect our lives and serve us all so well...

He called on New York Mayor Bill de Blasio to "act immediately," though he didn't say what action he believed the mayor should take.

Trump made his comments a day after police made a round of arrests in connection with the dousings, which involved police getting soaked after responding to unruly neighborhood water fights during a recent spate of hot weather.

MORE: 3 charged in instances of NYPD officers doused with water in Manhattan, Brooklyn

One video showed two officers ignoring people throwing buckets of water on them on a Brooklyn sidewalk, casually walking away as their uniforms got soaked.
Another video showed officers getting drenched by buckets of thrown water while making an arrest in Harlem. One officer is hit in the head with a tossed bucket.
The police involved in both dousings appeared to shrug them off, either in a spirit of good humor or remarkable restraint.

City leaders have been trying, for years, to improve what has historically been a confrontational relationship between officers and young black and Hispanic people, in part by having officers behave more like members of the community and less like an occupying force.

But after videos began circulating on social media, three people were arrested on charges including disorderly conduct.

De Blasio, who is seeking the Democratic presidential nomination, publicly condemned the dousings this week, saying people who interfere with police that way could face charges.

Crime’s gone down year after year in New York City and it’s not just because you finally left town. https://t.co/sJXqu6hRY5

Since then, other videos have begun circulating showing groups of laughing children and teenagers in New York wetting police officers with squirt guns or buckets of water after officers got too close to water fights.

Police union officials have been incensed, saying the incidents show a lack of respect that is threatening public safety. The Police Department issued a memo to officers, urging them not to tolerate such behavior.

The Legal Aid Society, a group that provides legal representation for people accused of crimes, issued a statement Thursday saying arrests in situations like this would be "disproportionate" and hypocritical.

"Young people are getting arrested for splashing water on 100 degree days while officers who have killed and seriously injured people continue working, collect pensions, and barely get a slap on the wrist," said Anne Oredeko, a supervising attorney in the society's Racial Justice Unit.

The splashings took place several days after the U.S. Justice Department declined to bring criminal charges against a white New York City police officer accused of killing an unarmed black man with a chokehold while arresting him in 2014.

"Historically, black and Latinx communities have suffered the brunt of police abuse, harassment, and violence," Oredeko said. "The Department should focus on addressing those root issues before attempting to criminalize playing with water."

Yet some black leaders who have previously campaigned aggressively for police reform have said there's no excuse for how the crowds behaved.

In a letter published in The New York Times, a group of 27 black political and corporate leaders in the city, wrote that even though the death of Eric Garner "remains a deep and lingering wound," police officers deserved respect for "putting their lives on the line."

There was a similar but less-noticed backlash in Atlanta in June after a group of young people who had gathered for a huge squirt gun fight organized by anti-violence advocates turned their soakers on an officer who arrived to help with crowd control.