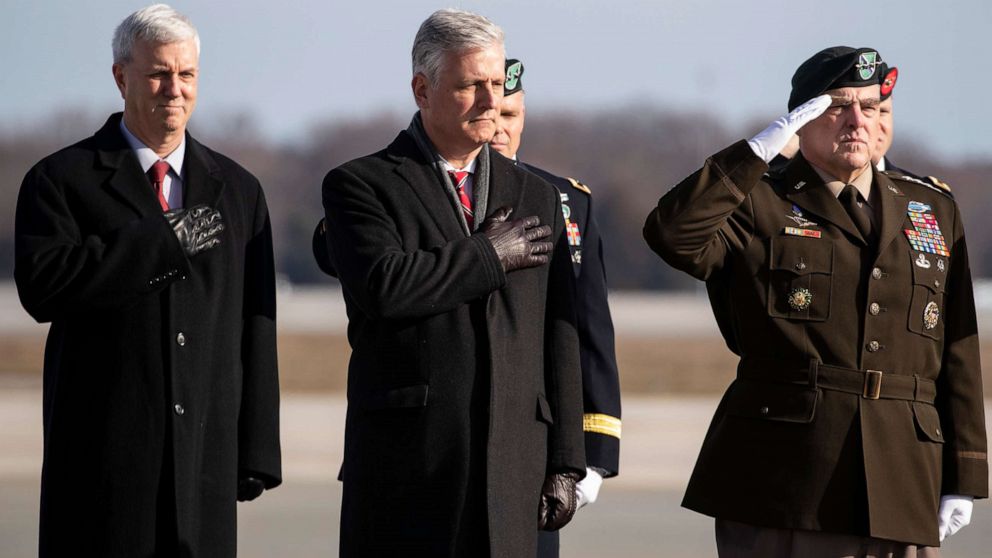 In different public appearances, National Security Adviser Robert O'Brien and Joint Chiefs Chairman Gen. Mark Milley have contradicted each other on whether U.S. troops will withdraw -- a marked display of chaos surrounding Trump's push to end the 19-year-old war in the weeks before the 2020 election.

Trump himself has added to that confusion, tweeting last week that all remaining U.S. service members "should ... be home by Christmas."

U.S. forces are currently drawing down from 8,600 troops to 4,500, nearly eight months after the Trump administration signed an agreement with the Taliban, the militant group that once controlled Afghanistan and sheltered the al Qaeda operatives responsible for the Sept. 11 attacks.

That deal began a phased withdrawal of American forces and the closure of U.S. bases in exchange for Taliban commitments to begin peace talks with the Afghan government and deny safe haven to al Qaeda or other terrorists.

U.S. officials, including Milley and Secretary of State Mike Pompeo, have vowed that withdrawal would be "conditions-based," including a reduction in violence -- although that commitment isn't explicit in the agreement.

But instead, O'Brien said last week that U.S. troop levels would be down to 2,500 by early next year. Trump campaigned on "ending endless wars," O'Brien added, saying, "We can't spend the best of American youth in Afghanistan trying to work out a situation that's been going on for thousands of years, these tribal wars."

"Robert O'Brien or anyone else can speculate as they see fit. I'm not going to engage in speculation. I'm going to engage in the rigorous analysis of the situation based on the conditions and the plans that I am aware of and my conversations with the president," Milley told NPR in an interview that aired Monday.

Now, O'Brien has fired back: "In the early part of next year, we're going to be down to 2,500 troops. It's been suggested by some that's speculation. I can guarantee you that's the plan of the president of the United States. It's not speculation. That's the order of the commander in chief," he told the Aspen Institute Friday.

He also suggested Trump's tweet about a full withdrawal by Christmas was aspirational or metaphorical: "What the president was doing is he was expressing the same desire I think every president since the Revolutionary War, the Civil War, World War I or World War II -- all presidents, all GIs want the troops home by Christmas."

The Pentagon referred questions about O'Brien's comments to the White House.

"Troop withdrawals should be based on local conditions, not domestic politics," said Richard Haass, a former senior State Department official under George W. Bush, in a tweet. He added in another, "Gone is anything that resembles an interagency policy process. What we have instead is interagency chaos."

Amid mixed signals from Trump and his top advisers, violence has been surging on the ground in Afghanistan. Fighting in Helmand province displaced around 35,000 people this week, according to Amnesty International, with some 200 people killed or injured, per the United Nations. An unborn baby was among the dead after the mother was shot, Doctors Without Borders reported Monday, adding the woman miraculously survived.

The Afghan government has blamed the Taliban for 575 attacks across the country in the last two weeks, including 92 landlines, six suicide bombings, and killing or wounding 251 civilians, per a Ministry of Interior spokesperson.

But the chief U.S. negotiator Zalmay Khalilzad said Thursday that he and the top U.S. general in Afghanistan, Scott Miller, had a series of meetings with Taliban leaders where they "agreed to reset actions by strictly adhering to implementation of all elements of the U.S.-Taliban Agreement and all commitments made."

"This means reduced numbers of operations. At present too many Afghans are dying. With the re-set, we expect that number to drop significantly," added Khalilzad, without calling out the Taliban for those deaths.

In their own readout, however, the Taliban made no explicit mention of reducing violence, instead saying they "discussed in detail how [the U.S.-Taliban deal] would be better implemented" and committed to "work to ensure that the agreement is fully implemented."

That doesn't mean fewer Taliban attacks because the agreement the U.S. and Taliban signed did not explicitly forbid the militant group from going after Afghan security forces -- one way the U.S. has been accused of undermining the Afghan government.