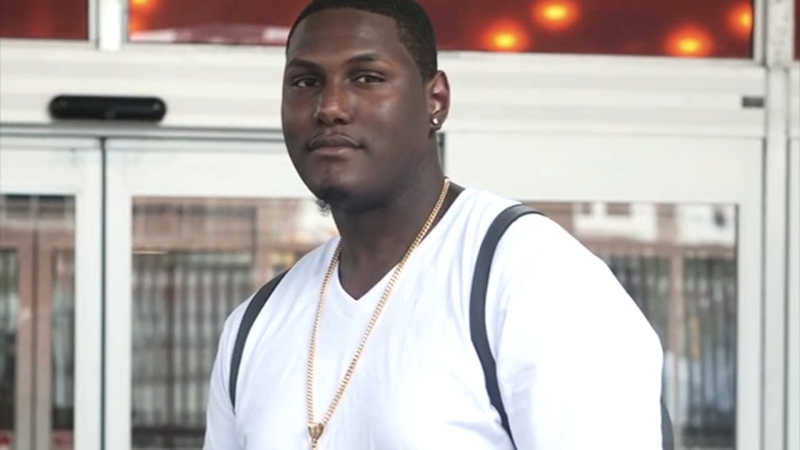 Brian Reynolds had just gotten off his Sunday night shift working security at a night club at about 1:30 a.m. on 7th Avenue in Chelsea.

"You don't explain it, it's a hate crime, it's unfortunate," Reynolds' girlfriend Sonya Morrison said as she spoke exclusively to Eyewitness News.

She was on the phone with him Sunday night, as she is every night. But as they talked, something terrible happened.

"I heard like rustling in the background from his phone, it sounded like his phone fell. Like I heard him say 'What are you looking at?' to someone," Morrison said.

"Then he literally said 'They threw a trash can in my face,'" Morrison continued. "And he was on the phone actively, like you know with the blood coming out."

Police say Reynolds was set upon by three men.

One allegedly hurled racial slurs, while a second hurled a metal garbage can, cracking his jaw.

And this wasn't the only racially-motivated assault early Monday morning.

A few hours later, another man was walking near Allen and Rivington on the Lower East Side past a group of six people, three men and three women.

"You're not like us," police say one of them shouted. "You're not our race."

And then another used the n-word, before two of them punched and kicked the victim, shoving him through a construction site door.

But Brian Reynolds was. The aspiring hip-hop musician wound up at Lenox Hill Hospital on the Upper East Side, where Monday night he was wheeled into surgery to reconstruct his jaw.

"I don't understand why people feel like it's okay to do something like this and think they can get away from it," Morrison said. "He's just minding his business."