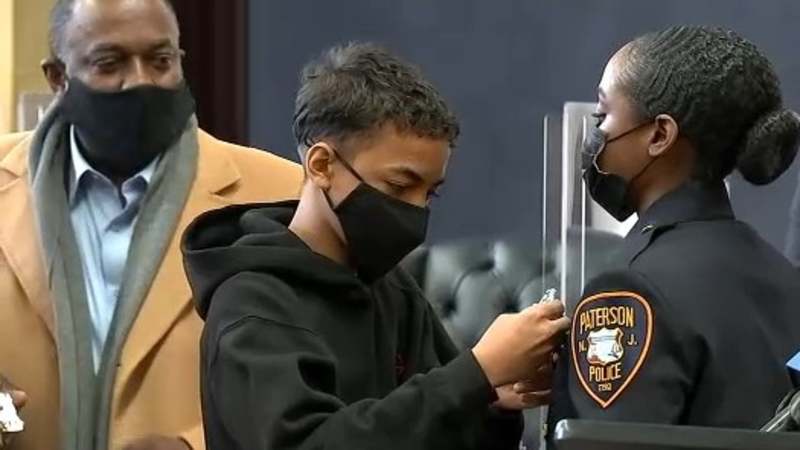 PATERSON, New Jersey (WABC) -- For the first time in the department's history, the badge number of a fallen Paterson police officer has been reassigned -- to his sister.

In 2007, Paterson Police Officer Tyron Franklin was fatally shot in the line of duty while protecting the residents of Paterson.

"He was so brave," the 28-year-old said. "He showed me how to be courageous, how to look out for others, and I'm so blessed to be here today."

Surrounded by her parents and her nephew, who was just 18 months old, when his father was slain, Franklin-Marks was proudly pinned with her brother's badge number, 4637, on Friday.

"I know he would be proud," said Tyron Franklin, Jr., a high school freshman. "She's following in his footsteps."

Tyron Franklin was at a Paterson restaurant picking up a meal when he encountered a man with a gun, and a struggle ensued.

"He fought until the end," she said with tears in her eyes.

Her son made the ultimate sacrifice. and his father, retired fire captain Larry Franklin, said there was no stopping their daughter from pursuing a career in law enforcement. It was her destiny.

"She saw her brother laying there and knew there was something she could do, pass the baton and keep the race going," he said. "She was a teenager, whisked away in the back of a police car, not knowing what would happen to her brother. And now, she's followed in his footsteps."

Mayor Andre Sayegh and top brass from the Paterson Police Department were on hand for the ceremony.

"You're a source of inspiration," Sayegh said.

Bevennia is set to graduate from the police academy at the end of December.