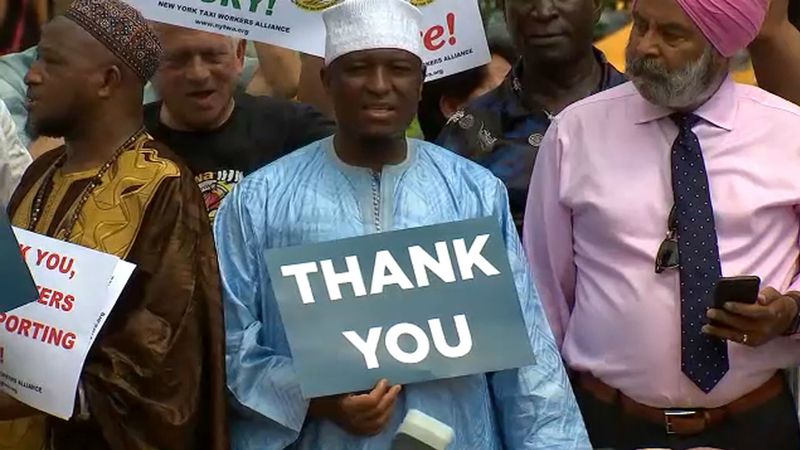 NEW YORK (WABC) -- There was a strong reaction to New York City becoming the first in the nation to put a cap on the number of ride-share companies like Uber and Lyft allowed on the street.

Mayor Bill de Blasio and members of the New York City Council attended a rally to celebrate the new limits on Thursday.

The City Council passed a bill Wednesday that imposes a one-year ban on new licenses for app-based for-hire vehicles.

Some New Yorkers don't think it's a good deal, but lawmakers hope the limitations will help reduce congestion and protect taxi drivers who have seen a steep decline in income.

The legislation also allows the city to set a base-pay rate for drivers that could be $17.20 an hour. The minimum compensation rule will go into effect by October.

"Five percent of for-hire vehicle drivers living on poverty wages now because of what these companies did to them," de Blasio said. "I don't have to tell you that meanwhile someone is laughing all the way to the bank - that was true until yesterday."

In the last few months, six yellow cab drivers committed suicide after they were unable to keep up with huge medallion payments and compete with Uber and Lyft.

De Blasio also lashed out at the industry for more than tripling the number of app-based cars on the streets of New York City in just four years.

"It sends a message about the resolve of New York City," he said. "No big corporation will tell us what to do -- not big oil, not the big pharmaceutical companies and certainly not Uber."

Uber said Wednesday that the city's 12-month pause on new vehicle licenses will threaten one of the few reliable transportation options while doing nothing to fix the subways or ease congestion.

The mayor says he will sign the City Council's bill on Tuesday.