Possible mass graves near Mariupol as Russia attacks in east 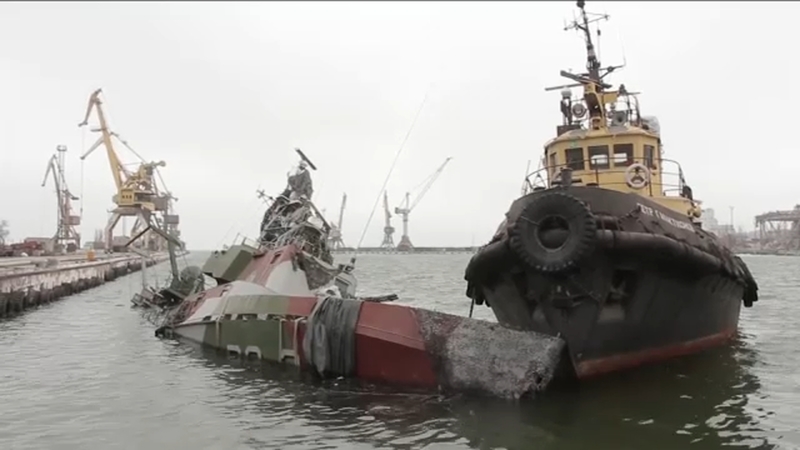 ZAPORIZHZHIA, Ukraine -- Satellite photos of what appeared to be rows upon rows of freshly dug mass graves on the outskirts of Mariupol brought the horrors of the war increasingly into focus, as Russia pounded away Friday at Ukrainian holdouts in the city's steel mill and other targets in a drive to seize the country's industrial east.

"Every day they drop several bombs on Azovstal," Petro Andryushchenko, an adviser to Mariupol's mayor, said of the besieged steelworks. "Fighting, shelling, bombing do not stop."

Cities elsewhere in the Donbas region also came under Russian fire overnight, and the attacks interfered with efforts to evacuate civilians.

The region, home to coal mines, metal plants and heavy-equipment factories, is bracing for what could be an epic clash as Russian President Vladimir Putin attempts to salvage a victory from the 8-week-old war widely seen as a blunder and a humanitarian disaster.

On Thursday, Putin claimed victory in the battle for the strategic southern port city of Mariupol, even though an estimated 2,000 Ukrainians remained holed up at the sprawling steelworks, which has been bombarded for weeks. Putin ordered his troops not to storm the stronghold but to seal it off.

At the same time, Maxar Technologies released new satellite images that it said showed more than 200 graves in a town near Mariupol, prompting accusations that the Russians were trying to conceal the slaughter of civilians taking place in the city.

Initial estimates from the Ukrainians said the graves could hold 9,000 bodies, but Andryushenko said there could be more. Ukrainian authorities have said over 20,000 civilians have been killed in the nearly two-month siege of Mariupol.

"The graves have been dug up and corpses are still being dumped there," the mayor's aide said.

Putin said Friday that Russia gave Ukrainian forces inside the steel plant the option to surrender, with guarantees to keep them alive, and offered "decent treatment and medical care," according to an account of a phone call with European Council President Charles Michel, provided by the Kremlin.

"But the Kyiv regime does not allow them to take this opportunity," Putin charged.

Repeated attempts to evacuate civilians from the the city have failed because Russia did not honor cease-fires, Ukrainian officials have said.

Ukrainian Deputy Prime Minister Iryna Vereshchuk said no humanitarian corridors for civilian evacuations would be open in Ukraine on Friday because it was too dangerous. She urged civilians to "be patient" and "hang in there."

Days into the Russian offensive to take the east, the campaign has yet to become a full-out assault, with military analysts saying Moscow's forces are still ramping up. But scattered towns in the east have experienced the thud of incoming shells that drive citizens out in panic.

Slovyansk, a city of about 100,000 in eastern Ukraine, came under fire during the night, according to Mayor Vadym Lyakh, who said no injuries were reported. But he urged residents to leave and said a convoy of buses would be organized. In Rubizhne, Russian fire prevented attempts to bring buses in, Luhansk Gov. Serhiy Haidai said.

Intensive shelling was also heard overnight in Kharkiv, a northeastern city that lies outside of the Donbas but is seen one of the gateways the Russians intend to use to encircle Ukrainian forces in the Donbas from the north, the south and the east.

If successful, the campaign would give Putin a vital piece of the country and a badly needed victory to show the Russian people amid the war's mounting casualties and the economic hardship caused by Western sanctions.

But analysts say Russian forces have yet to achieve any major breakthroughs in the Donbas or gain any significant ground. A senior U.S. defense official, speaking on condition of anonymity to discuss the Pentagon's assessment, said the Ukrainians were hindering the Russian effort to push south from Izyum, which lies outside the Donbas.

On Friday, Rustam Minnekayev, a senior Russian military official, outlined Russian war aims that appeared to be wider than what the Kremlin has stated in recent weeks. He said Russia's forces aim to take full control of not just eastern Ukraine but southern too.

He said such a move would open the way to the nation of Moldova, where Russia backs the breakaway region of Transnistria. Moldovan officials are warily watching Putin's actions in Ukraine.

Meanwhile, Russia's top diplomat, Foreign Minister Sergey Lavrov, said talks between the two countries have "ground to a halt" because Moscow hasn't received a response from Kyiv to its latest proposals, the details of which have not been released.

Putin's lead negotiator at the talks, Vladimir Medinsky, said he held several lengthy conversations Friday with the head of the Ukrainian delegation. He gave no details on what was discussed or say if any progress was made.

The battle for Mariupol has been seen as key to the eastern assault. Its capture would complete a land bridge between Russia and the Crimean Peninsula, which was seized by Moscow in 2014, and free up Putin's forces to take part in the larger campaign in the east.

Mariupol has been the site of some of the worst suffering of the war, and the satellite images released Thursday hinted at even more. In the images, long rows of dirt mounds stretch away from an existing cemetery in Manhush, outside Mariupol.

There was no immediate reaction from the Kremlin on the satellite pictures. When mass graves and hundreds of dead civilians were discovered in Bucha and other towns around Kyiv after Russian troops retreated three weeks ago, Russian officials denied their soldiers killed any civilians there and falsely accused Ukraine of staging the atrocities.