Who is Ukraine's Volodymyr Zelenskyy? Before 2019 election, former comedian played president on TV

Zelenskyy for now has said he will remain in Kyiv and has continued to post video addresses during the invasion.
ABCNews
By Ivan Pereira and Patrick Reevell 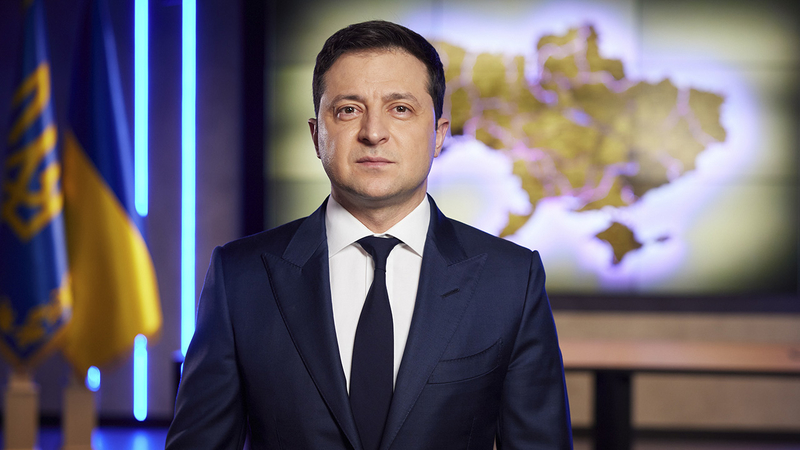 Who is Ukrainian President Volodymyr Zelenskyy?

KYIV, Ukraine -- Until his surprise election in 2019, Volodymyr Zelenskyy played a president on TV.

Today, the 44-year-old is leading Ukraine as it faces an invasion from Russia, facing a threat to his rule and perhaps his life, from President Vladimir Putin.

Addressing Ukrainians on television Thursday, at the end of the first day of the invasion, Zelenskyy said he had information Russia "has identified me as target No. 1 and my family as No. 2."

"They want to destroy Ukraine politically by destroying the head of state," the president said in the televised speech.

In a video posted to Twitter Saturday, Ukrainian President Volodymyr Zelenskyy says he and the people of Ukraine are defending their country as Russian aggression escalates.

Zelenskyy's life and career have been anything but typical compared to other international leaders, and he has faced a seemingly unending series of crises since taking office.

Zelenskyy, who is married and has two children, graduated from the Kyiv National Economic University in 2000 with a law degree, but he decided to pursue a different career.

He formed the comedy troupe Kvartal 95 with other actors in 1997 and in 2003, the group began producing television programs.

In 2015, Zelenskyy began starring in the role that would set him on the path to the presidency. In the show "Servant of the People," he played Vasyl Petrovych Holoborodko, a school teacher who wakes up to find that a rant he made against corrupt politicians went viral and catapulted him to the presidency.

Holoborodko was often portrayed as being in over his head, but willing to fight corruption.

The show was so popular that it led to Kvartal 95 creating a political party in its name.

In 2018, Zelenskyy abruptly moved into real politics and announced his candidacy for president under the Servant of the People party. During his campaign, he continued touring with his troupe and mocked his opponents in stand-up routines.

Zelenskyy also took to social media to promote his campaign and platform. His attitude was similar to his TV character as he vowed to crack down on corruption and promote a more centrist administration.

He went on to win the election in a landslide, taking over 73% of the vote, after running on a platform to end the war with Russia and its separatist proxies in eastern Ukraine.

ABC News contributor and retired Col. Steve Ganyard explains what the Russian military could do next in Ukraine on Sunday, Feb. 27.

News emerged that Trump had called Zelenskyy and pressured him to work with Rudy Giuliani and then-Attorney General William Barr to investigate Joe Biden, who was then running against Trump in the presidential election, and his son Hunter. Trump withheld $400 million in congressional aid to Ukraine when Ukrainian officials didn't comply.

Trump denied any wrongdoing, repeatedly saying it was a "perfect call," but a congressional investigation led to Trump's impeachment later that year. He was acquitted in the Senate in February 2020.

Zelenskyy has had a more amicable relationship with Biden since he took over the presidency and visited the White House last year.

Zelenskyy led his country as COVID-19 ravaged the world. He would test positive for the virus in November and was hospitalized for three days.

He came to office promising to find a way to resolve the eight-year conflict in eastern Ukraine with the Russian-controlled separatists there. He initially tried to engage with Putin diplomatically, but was treated coldly by the Russian leader.

In the past year, under pressure politically during the COVID-19 crisis, Zelenskyy had taken a harder line against pro-Russian political factions in Ukraine, including Viktor Medvedchuk, known as Putin's man in Ukraine.

The U.N. has estimated the conflict could produce as many as 4 million refugees, depending how long the invasion continues.

Russia's military buildup against Ukraine began around the same time Zelenskyy moved to sanction Medvedchuk and TV stations linked to him.

He has denied all allegations by Putin and Russian-controlled separatists that he is provoking war and made an impassioned plea in Russian on Feb. 23 for that country's people to reject the aggression.

"We don't need war. Not a cold one, nor a hot one, nor a hybrid one," Zelenskyy said during his speech.

Putin has claimed his military operation in Ukraine is aimed in part at "de-Nazification" of the country, playing on a false narrative that Western-leaning politicians are sympathetic to fascism.

Zelenskyy is Jewish and three of his great uncles were killed in the Holocaust.

Zelenskyy for now has said he will remain in Kyiv and has continued to post video addresses during the invasion.

During his speech on Wednesday, Zelenskyy switched from Ukrainian into Russian, appealing directly to Russians for peace, saying their leadership was leading them into a senseless war.

"I know that Russian TV won't show my speech. But citizens of Russia need to see it. They need to see the truth. The truth is you need to stop before it's too late," he said.