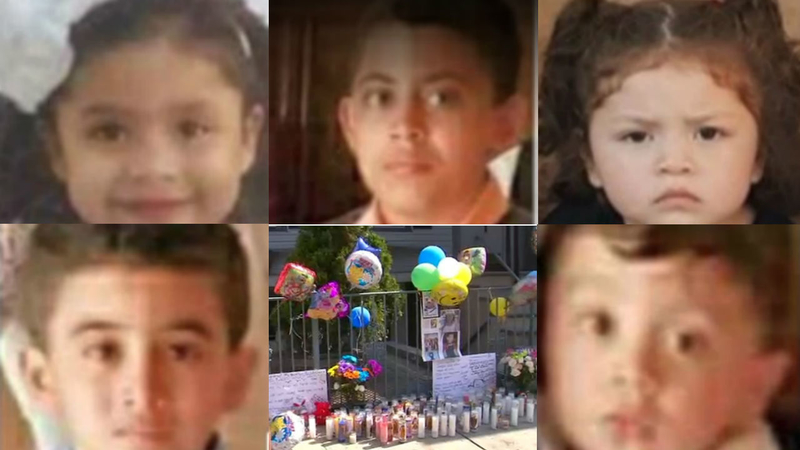 A public visitation that began at noon on Tuesday continued through 9 a.m. Wednesday, followed by a public Mass at St. Anthony of Padua Roman Catholic Church in Union City.

The children -- 2-year-old Jason Gonzalez, 4-year-old Shamira Lopez, 5-year-old Mayli Wood, 7-year-old Christian Josue Mendez and 13-year-old Jose Felipe Tejada -- died from injuries suffered in the July 13 fire. Officials have said four of the children were siblings, while the fifth was a relative. The children were all on the third floor of that building and were unable to escape. Union City covered the cost of the funerals.

WATCH video from outside the church after the funeral

Five small white caskets were side by side in the church, surrounded by an array of flowers with every pew packed. Mourners included police, firefighters, teachers and scores of people who were simply touched by the tragedy.

"There's no words to tell you how hard it is for a mother to hear the story and now we're in mass and watching everybody, all the family, it's very sad," said one of the mourners, Claudia Altamirano.

A 17-year-old brother of the victims and a woman on the first floor, where the fire began, were injured and are recovering.

Hundreds of people came to the church Tuesday and many stayed overnight to pay their respects and offer support to the grieving family. Gov. Phil Murphy and Union City Mayor Brian Stack were among the mourners.

The cause remains under investigation, but since the fire, the owner of the building has been hit with $60,000 in fines due to a slew of fire code violations that include an apparent illegal apartment where the fire started, no working smoke detectors and a fire escape blocked by an air conditioner.

Hudson County prosecutors are still determining whether they will pursue criminal charges.

The Red Cross is providing temporary assistance to the fire victims, and Mayor Stack's office is collecting donations in the form of a check or through a GoFundMe account.
If you would like to help, checks can be made payable to the Union City Fire Victims' Fund and may be sent to: