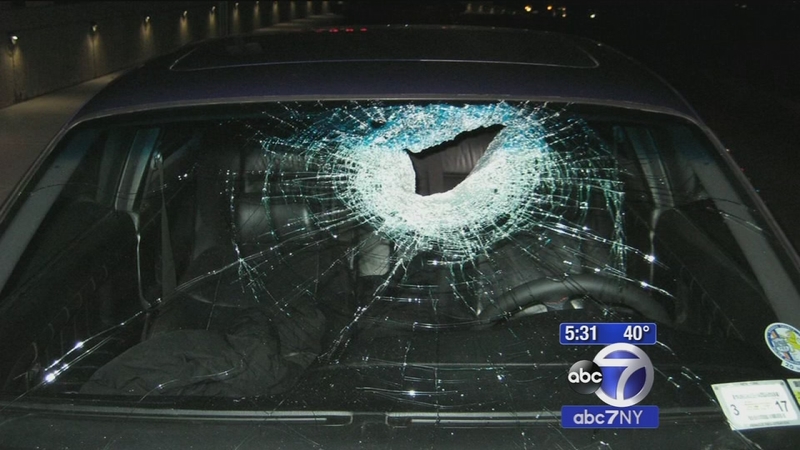 2 hurt when brick crashes through car windshield in Uniondale

UNIONDALE, Long Island (WABC) -- Police say a brick thrown from a pedestrian footbridge on Long Island crashed through a car windshield, injuring two people inside, over the weekend.

The incident happened at about 8 p.m. Saturday along the Meadowbrook Parkway in Uniondale.

The brick struck a blue 1996 BMW traveling northbound, just south of Glenn Curtiss Boulevard, entering through the windshield and first striking the driver. The 21-year-old man from Island Park was hit in the right shoulder, causing bruising, but he declined medical attention.

The front seat passenger, a 22-year-old woman from West Hempstead, sustained a glass-related injury to her left eye and bruising to her mouth.

The driver did not lose control of the vehicle, and he reportedly told police he saw as many as two people on the footbridge.

"He briefly saw a person up on the overpass or possibly two people on the overpass," State Police Senior Investigator Thomas Hughes said. "The brick went through the windshield, and they got off at the next exit and drove directly to the hospital."

The woman was treated and released from Nassau University Medical Center.

There are no surveillance cameras in the area of the overpass, which is used mostly by students at nearby Kellenberg Memorial High School. Piles of bricks were located in the immediate vicinity of the bridge, where they were stockpiled with other supplies by the school's landscapers. And officials say it isn't the first time something like this has been attempted, as broken bricks can be found along the roadside and on the ledge of the bridge.

A portion of the Meadowbrook was briefly closed Monday so that a highway worker in a bucket truck could clear the ledge of debris.

"This could have been anybody's mom, dad, sister, brother out there," Hughes said. "We want to make sure it doesn't happen again, and right now, we'd really like to find out who did it and make an arrest on the case."

They have stepped up patrols in the area, but there are few leads as to tracking down the suspect or suspects.