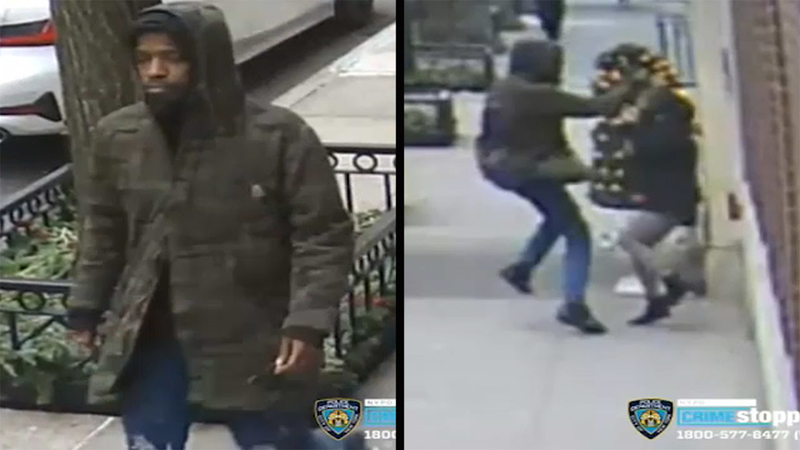 UPPER EAST SIDE, Manhattan (WABC) -- Police are searching for a man caught on surveillance video threatening people with a knife on the Upper East Side.

According to police, the man was involved in three separate attacks on Monday morning which all took place within a 30 minute span.

The first incident occurred around 10:43 a.m. in front of 960 Park Avenue, where a man was approached by the suspect, who displayed a knife and chased the victim around a car before walking away.

No injuries were reported and police say the suspect was seen walking eastbound on East 82nd Street, before heading left on Park Avenue.

The second attack took place just after 11 a.m. in front of 45 East 85th Street, where a 21-year-old woman was slapped on the side of the head by the same suspect, police said.

The woman suffered pain and swelling to her face but refused medical attention.

In the third incident, both a man and woman were shoved by the suspect as they were walking near the southwest corner of East 87th Street and Third Avenue.

Police say an eyewitness took a photo of the suspect with their cellphone, causing the man to chase the eyewitness southbound on Third Avenue into traffic.

Police say the suspect eventually stopped chasing the witness and was last seen walking along East 86th Street towards Third Avenue. There were no reported injuries.

Anyone with information in regard to this incident is asked to call the NYPD's Crime Stoppers Hotline at 1-800-577-TIPS (8477) or for Spanish, 1-888-57-PISTA (74782). The public can also submit their tips by logging onto the Crime Stoppers website at WWW.NYPDCRIMESTOPPERS.COM, or on Twitter @NYPDTips.