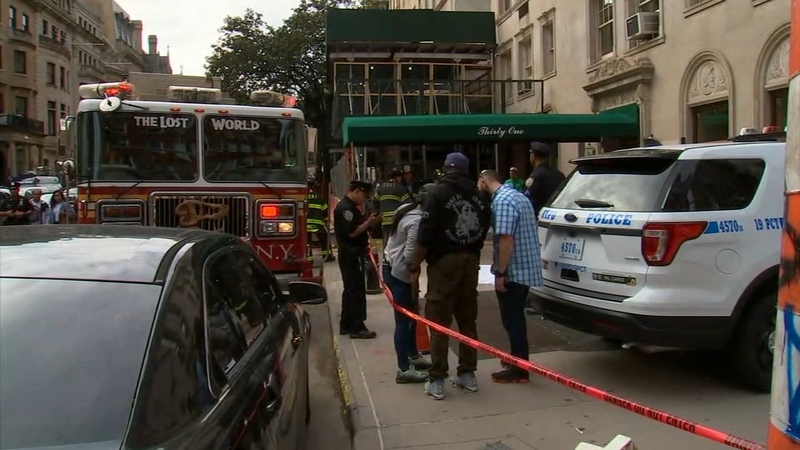 UPPER EAST SIDE, Manhattan (WABC) -- An 84-year-old woman was killed when an SUV jumped a curb on the Upper East Side of Manhattan Friday afternoon.

The accident happened at about 3:20 p.m. at East 79th Street and Madison Avenue.

Police say an investigation revealed that a grey Land Rover was travelling north on Madison Avenue and tried to turn left onto East 79 Street when it mounted the curb and struck the woman before striking scaffolding.

The victim was pronounced dead at the scene by EMS after being found unconscious and unresponsive with trauma to her head and body. She has been identified as Nahid Taghinia-Milani.

Eyewitness Philip Zammora was at the door at 31 East 79th when the vehicle made a left turn from Madison, stopping at the crosswalk to let the woman pass by.

"The lady was crossing the street and then I see the car approaching," said Zammora. He says she had one foot on the curb when suddenly the driver hit the gas, plowed right into her and flew onto the sidewalk past Zammora's building.

Workers at that job site rushed to help. "It was just chaos," one eyewitness said. "Kids were getting out of school and everybody hovering over the woman."

The vehicle came to a rest on the sidewalk. The driver stayed on the scene and cooperated with investigators. There have been no arrests.

Investigators spent hours taking measurements and scanning video from the city camera that sits above the corner.

After the crash, eyewitnesses said the driver seemed dazed and in shock. "She was just stunned. Like she couldn't believe it," said one witness.

"When she come out from the car she said I have a brake problem but the car is brand new," said Zammora.