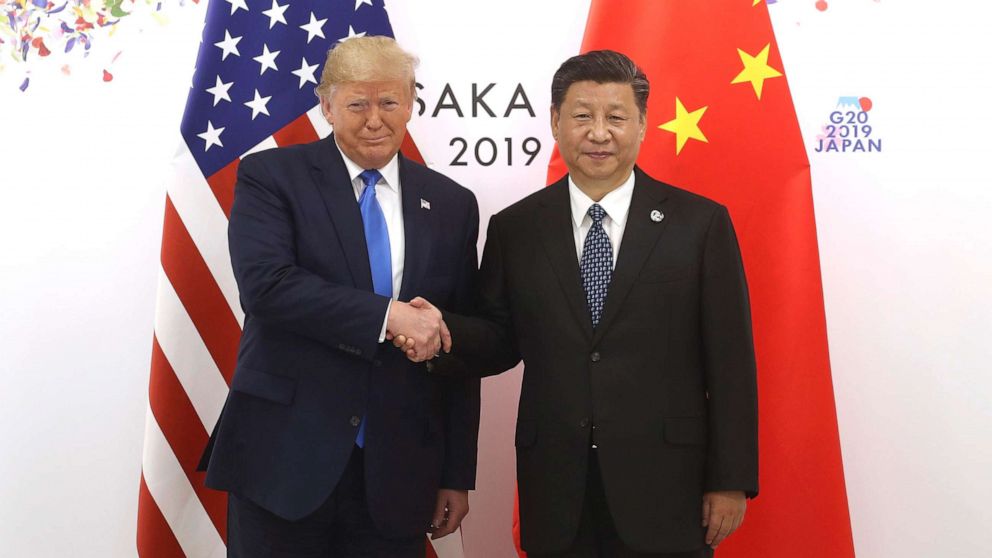 WASHINGTON -- The United States and China announced Friday they had agreed to a limited trade deal that would result in the rollback of some tariffs on Chinese imports to the United States.

President Donald Trump tweeted that China had "agreed to many structural changes and massive purchases of Agricultural Product, Energy, and Manufactured Goods, plus much more" but that some U.S. tariffs on Chinese imports would remain.

Trump said, though, that another round of 15% tariffs scheduled to hit another $160 billion of Chinese goods starting Sunday -- which would have made virtually all Chinese imports subject to levies -- would not go into effect.

The announcement of a "phase one" agreement, as the administration has termed it, came as the president fights off an impeachment process in Congress. He tweeted news of the deal less than 20 minutes after the House Judiciary Committee voted to send articles of impeachment against him to the full House for a vote teed up for next week.

White House press secretary Stephanie Grisham tweeted at Speaker Nancy Pelosi, saying that "this is what real leadership looks like" and that Trump "never stops working and continues to make successful deals that benefit this country."

But it was not the first time Trump had announced "phase one" of a trade deal with China had been agreed to.

Just two months before, sitting in the Oval Office with Chinese negotiators, the president announced that both sides had agreed to "phase one" of a deal -- much as he did on Friday -- but that the details were still being worked out.

The White House had aimed for that agreement to be signed last month; instead, negotiations continued as the president repeatedly said the deal was being "papered."

A top economic advisor to the president, Larry Kudlow, said Friday afternoon that the deal would be signed "inside of a few weeks" due to some "clerical" procedures that needed to be worked out.

Kudlow, the director of the National Economic Council, said that the agreement "will take effect just as soon as the translations and the paperwork can be done, and that should be done inside of a few weeks."

The new version of the deal announced Friday "requires structural reforms and other changes to China's economic and trade regime in the areas of intellectual property, technology transfer, agriculture, financial services, and currency and foreign exchange," according to the U.S. Trade Representative's office.

China, it said, had also committed to "make substantial additional purchases of U.S. goods and services in the coming years" and that both sides had agreed to establish "a strong dispute resolution system that ensures prompt and effective implementation and enforcement."

Chinese officials held a simultaneous press conference in Beijing announcing the deal, saying that the agreement had yet to be signed but that significant progress had been made.

Trump tweeted that negotiations would "immediately" begin on "phase two" and that he would not wait until after the 2020 U.S. election to start.

Friday's announcement came after months of escalation in a trade war with China that Trump had launched and made a central part of his presidency.

Through a series of tariffs, the president aimed to turn up the heat on Beijing and force them into a deal ahead of next year's presidential election.

The levies he imposed hit U.S. farmers and manufacturers hard, and the administration has provided financial assistance to farmers who have struggled as the trade war plays out.