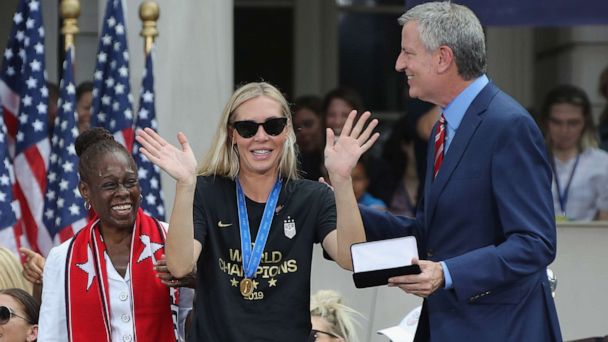 Now she's searching for a copy to the latter -- and de Blasio is ready to help.

"So sorry to hear it, Allie. Hang in there," the New York mayor tweeted Friday morning. "Don't worry about the key. Like any good New Yorker, we keep a spare for our neighbors! We got you covered."

Long and her husband, Jose Batista, were staying at the Ritz-Carlton hotel in downtown Los Angeles as the team appeared at Wednesday night's ESPY Awards when someone apparently entered her room and stole her wedding ring and her key to the city, according to a high-ranking Los Angeles Police Department source.

The couple left their room and used the latch to prop the door open slightly while they visited someone else in the hotel, the source said.

Long and her husband returned to the room, but didn't realize until Thursday morning that her jewelry, cash and key were missing.

An official told ABC News there is security video from the floor and it is currently being reviewed by LAPD detectives.

She tweeted about the incident Thursday night, asking de Blasio if he made copies.

Long is actually from just outside New York City, having been raised in Northport on Long Island.

The U.S. women's national soccer team defeated the Netherlands, 2-0, on Sunday to claim its second consecutive World Cup. The team returned to New York late Monday, spent much of Tuesday doing media appearances and then were feted with a ticker-tape parade Wednesday morning followed by a quick flight across country for the ESPYS at night.

They were awarded an ESPY for Best Team at the show.

Long, 31, is a reserve midfielder for the U.S. women's team. She only played in one game in this year's World Cup, an appearance against Chile in the group stage. She has 45 caps for the national team and has scored six goals.

In an Instagram post Thursday night, Long focused on the silver lining, seeming to remember that what really matters is the safety of herself and her husband -- and that hard-fought World Cup medal.

"Take my ring but not my mans (or medal Thank God)," Long wrote in the caption.