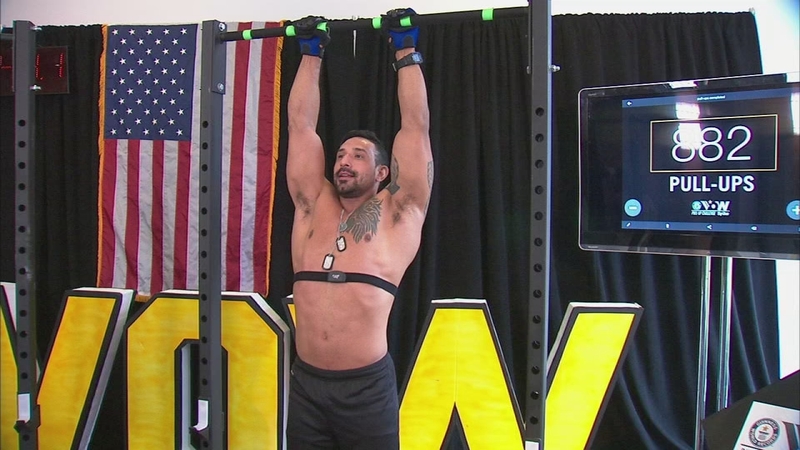 NEW YORK (WABC) -- A Marine vet set a new Guinness World Record pull-up record as part of an effort to also make a difference in the lives of his fellow veterans.

Marine Corp veteran Guy Valentino completed 5,862 pull-ups in 24 hours to break the Guinness World Record. The old record was 5,801 pull-ups. Valentino's record-setting effort was part of an effort to help Veterans Operation Wellness inspire vets to make the same commitment to their health and wellness that they made for their country.

When most Americans describe the issues facing returning vets, they cite unemployment, homelessness or PTSD. Veterans Operation Wellness works to shed light on the declining physical health of veterans. A CDC survey found that veterans are more likely to develop chronic conditions such as heart disease because of extreme weight gain compared to their non-veteran peers. VOW tries to motivate vets to find new ways to stay fit in their communities.

While Valentino was trying to set the world record, former Army Sergeant and wounded warrior Brendan Ferrera attempted to surpass his own one-armed pull-up best to inpire other vets to attempt their own personal records.

Hundreds of veterans from across the New York City region and the country cheered on Guy and Brendan and did pull-ups with them. Veterans from America's Parade, the Yellow Ribbon Fund and other organizations were on hand to celebrate the official record-breaking.

An adjudicator from Guinness World Records was on hand to verify the results and officially announce the breaking of the pull-ups record.