The victims are identified as 69-year-old Robert Winner of Marlton, the pilot, and 71-year-old Timothy Scannevin of Southampton.

Winner was on a mission for Angel Flight East when the twin-engine aircraft went down. He started volunteering for the organization in 2013 and had completed 16 flights before Wednesday's mishap that also killed his passenger, Scannevin.

"Just devastation," said Ellen Williams of Angel Flight East. "This wonderful man, with a family, and in the process of providing this incredible service lost his life and that's just shattering for all of us."

Angel Flight is an organization of 400 pilots in 14 states that provide air transportation to people who need non-emergency medical treatment some distance away.

Winner, like all the pilots, donated his time and the full cost of the flight.

He was en route from South Jersey to Hyannis, Massachusetts to fly a patient to Philadelphia for treatment.

"It's very sad. I just feel fortunate that he was part of us and he was part of our group," said Williams. "And our deep sympathy to his family and also to Timothy's family. What they must be going through I can't imagine."

The plane had taken off from South Jersey Regional Airport in Lumberton, which is about 10 miles southwest of the crash scene.

Video from Chopper 6 showed the wreckage of the plane in a wooded area.

Chopper 6 over scene of plane crash in Burlington County on June 13, 2018.

It appeared the plane cut a large swath through a field and skidded across the roadway before coming to rest in the woods.

As for Timothy Scannevin, Williams said it isn't uncommon for pilots to bring along a friend or spouse as companionship on the mission.

This is the first accident ever in Angel Flight's 25 years of providing this service.

The NTSB is currently investigating the cause of the crash.

Officials said the investigation was in its preliminary stages and a final report usually takes about 12-18 months. 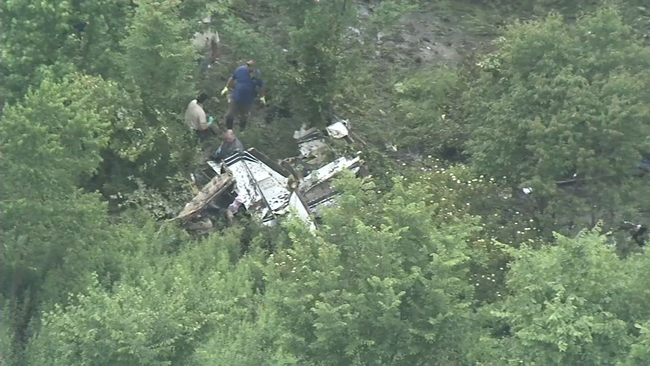