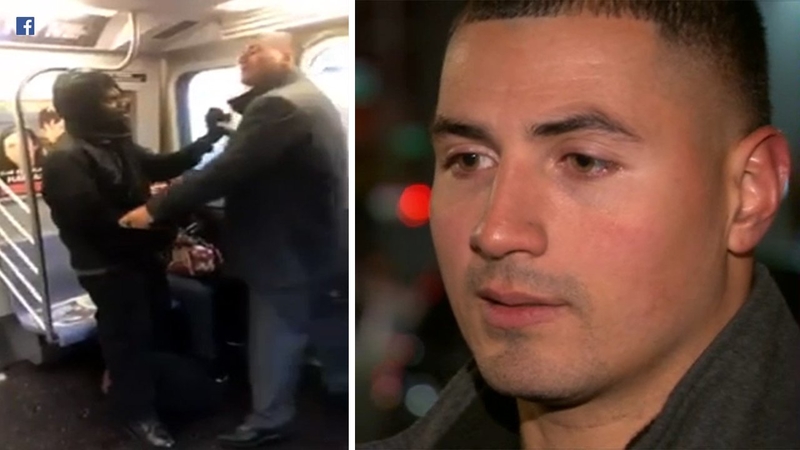 NEW YORK (WABC) -- The NYPD says it's looking for the foul-mouth attacker who beat up a young woman who dared ask him to take up a little less room on a Brooklyn subway seat.

The man who came to her rescue spoke about what he did in that situation, and why he did it.

Victor Conde rides the N train daily to work but on Thursday morning something alarming derailed his routine.

Just feet away, he noticed a stranger getting aggressive with another female passenger and he quickly stepped in.

"That's when I dropped whatever I had and I just ran over and tried to help," Conde said.

Cell phone video captured the aftermath, but moments before Samantha Saia says the man sitting next to her was manspreading and pushing her into the wall.

When she tried to ignore him, he became more violent and allegedly punched her in the face.

"He said 'Don't ignore me. I felt this.' I turned around and bam, I banged my head into a wall. And at that point I just felt blood gushing," Saia said.

Conde immediately confronted the man and gripped him up ordering he get off at the next stop.

He says he considered calling police, but felt the situation would escalate even more if he tried to restrain the man until cops arrived.

"They were kind of like shoving each other, so I grabbed him, I grabbed him by the wrist just to make sure he didn't have anything on him, or he wouldn't reach for anything," Conde said.

The stranger who Conde says seemed disoriented left the train willingly, and Saia thanked Conde repeatedly for his bravery before the two went their separate ways.

"The slogan says 'See something, say something.' Who are you going to say it to, it was just impulse I jumped up and wanted to help," Conde said. "I just wouldn't be myself if I didn't do something, I like to help people, that's always been me."