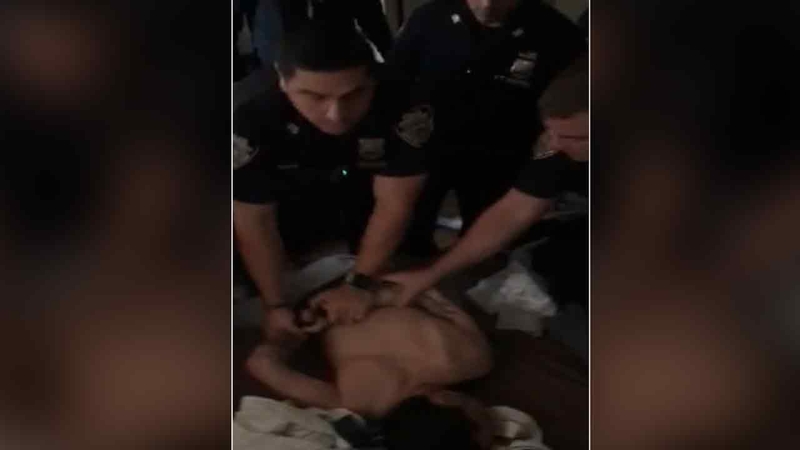 STATEN ISLAND, New York (WABC) -- A disturbing incident involving the NYPD that was recorded on a cell phone is now the focus of multiple investigations.

Sonia Adorno, having seen watched the video of her son, William Colon, being Tasered, punched and arrested by NYPD officers, is among those looking for answers.

"In the video you can clearly see and hear how confused William is," Adorno told Eyewitness News. "He's panicked. He doesn't know what's going on."

"It's just horrific," she added. "No one should have to go through that."

Police had answered a domestic violence call at Colon's apartment on September 28th after an argument between William and his ex-girlfriend.

"They barge into a home without probable cause, without a warrant, without justification," said Legal Aid attorney Christopher Pisciotta. "They force their way into that home. And then they man-handle William."

The cell phone video taken by William's brother, Jaz, begins as police attempt to enter the apartment, with the young men questioning what they want.

"The officers should have deescalated right from the start," said Pisciotta.

But as William struggles with officers, he is handcuffed and rolled over on his stomach and is seen being punched by one officer.

Then the officer then puts a Taser to his back, and his body goes limp.

"I just saw him go limp," said Adorno. "So I wasn't sure what his status was. And then they didn't even transport him right away to the ambulance."

"The use of force at that point? No, that's brutal," said Pisciotta. "That was an assault."

Asked about the incident, Police Commissioner James O'Neill did not want to discuss specifics.

But he said based on the initial call, "the female did have injuries, and he was subject to arrest. We will take a look at it and determine if the force that was used was necessary."

But Colon's family says there were eight officers against the young man who is 4'8" tall and weighs 85 pounds.

"I want them to be held accountable for the force they used," Adorno said.

According to the Richmond County District Attorney's Office there is also police body cam video of the incident.

They stress they are taking the matter seriously and are conducting their own full investigation.