'She's got the AK and the shotgun'
ABCNews
By EMILY SHAPIRO 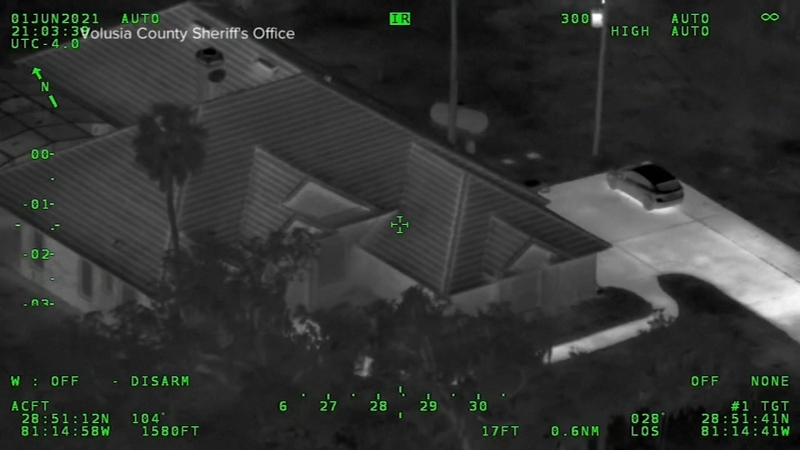 Sheriff: 2 children break into a home, open fire on deputies

VOLUSIA COUNTY, Fla. -- A 14-year-old girl is seriously hurt after she and a 12-year-old boy allegedly armed themselves with stolen guns and opened fire on Florida deputies, officials said.

The children, who reportedly ran away from a group home hours earlier, allegedly broke into an empty house Tuesday night, which the homeowner said was stocked with an AK-47, a handgun, a shotgun and a large amount of ammunition, the Volusia County Sheriff's Office said.

The 12-year-old boy told investigators he grabbed the AK-47 and two loaded magazines for the AK-47 from a case in the bedroom, according to the charging affidavit.

Deputies surrounded the home and made announcements, trying to talk the children into surrendering peacefully, according to the sheriff's office.

But the children started shooting, allegedly with the homeowner's guns, the sheriff's office said.

The 12-year-old later told investigators that the 14-year-old had said, "I'm gonna roll this down like GTA,"referring to the video gameGrand Theft Auto, Chitwood said.

Deputies tried to call those who knew the children who could help negotiate, Chitwood said, and a sergeant threw his personal cell phone to the kids to try to make contact.

"Nothing, nothing worked," Chitwood said at a news conference Wednesday.

"They were coming out to kill cops," Chitwood told reporters Tuesday night.

The boy said he fired multiple rounds from the AK-47 and had to reload the second magazine, according to the charging affidavit.

After allegedly firing at deputies for about 30 minutes, the 14-year-old girl then came out of the garage and allegedly pointed the shotgun at deputies twice, according to the sheriff's office.

She was shot and wounded by a deputy, suffering life-threatening injuries, officials said. She's in "critical but stable" condition, the sheriff said Wednesday afternoon.

The body camera showed an officer standing behind a tree as many shots rang out.

"Female has a shotgun in her hand," he said at one point, and later shouted,"Put the gun down now!"

"They're shooting at me," he said later.

"She's got the AK and the shotgun... shots fired again, female now has a pistol," he said.

Chitwood said Tuesday night, "Deputies did everything they could tonight to de-escalate and they almost lost their lives."

"They took rounds -- multiple, multiple rounds -- before they were left with no other choice but to return fire," Chitwood said.

"Deputies had nowhere to hide but trees," he added.

No deputies were hurt, officials said.

Both children were charged with attempted first-degree murder and armed burglary, according to documents.

Kitwana McTyer, president and CEO of Florida United Methodist Children's Home, where the children lived, called the incident "tragic" and said it is "the result of the system failing our children."

"These children are in desperate need of care in the appropriate setting, which is a higher level of care than we provide," McTyer said in a statement.

Both children were in the home's emergency shelter care program, which is currently serving three children, McTyer said.

"We have recently made changes to our Emergency ShelterCare program and have been working with our partners, including Sheriff Chitwood, CommunityPartnership for Children (CPC), and the Department of Child Welfare to address the state of child welfare in our community and the gaps in the system that result in the lack of adequate or appropriate placement for children who should at times be in the care of the Department of Juvenile Justice (DJJ)," McTyler said.

"As a result of this event, we will be placing a moratorium on our campus Emergency Shelter Care program for the next 30 days and then will cease to provide that service until such time if/when that we feel that we can do so in a safe manner for the children coming into care and simultaneously protect our staff," McTyer said.

"At this juncture, the level of children who are being sent to us through Emergency Shelter care at times is beyond the scope of our capabilities to provide the care required and limits who we can serve as part of our mission."
Report a correction or typo
Related topics:
floridashootingcaught on videou.s. & worldabc newsnational
Copyright © 2022 ABC News Internet Ventures.
TOP STORIES
15-year-old arrested in stray bullet death of Kyahara Tay
Possible monkeypox case linked to patient in NYC
2 officers hurt when suspects' car crashes into NYPD cruiser
Former NYC Mayor Bill de Blasio to run for redrawn House seat
Small town girl's journey from cheerleader to sex-trafficked 'hostage'
Adams' deal with Albany would keep speed cameras operating 24/7
AccuWeather: Warmup into the weekend
Show More
Exclusive: Friend lends hand after fruit vendor attacked at NYC park
How much are your taxes? Check out our Long Island school tax database
Disney celebrates National Streaming Day with drone show over DTLA
Britain: Russian troops likely to redeploy from Mariupol
Celebrate National Streaming Day with Hulu for $1/month for 3 months
More TOP STORIES News