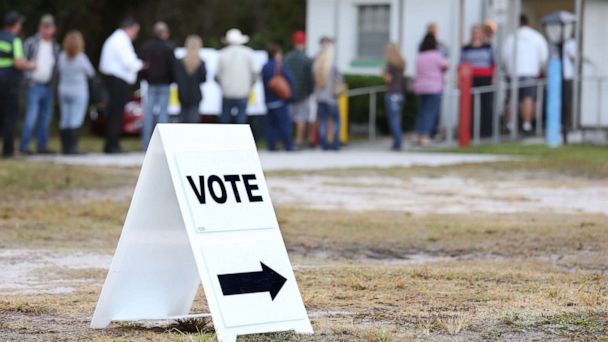 Russian hackers were able to infiltrate the voter databases of two Florida counties ahead of the 2016 presidential election, though there's no evidence any of the data was tampered with, Florida Gov. Ron DeSantis said Tuesday.

DeSantis was among the Florida officials who demanded an FBI briefing on the alleged hacks, after a line in special counsel Robert Mueller's report on Russian interference mentioned that Russian military intelligence hackers were able to "gain access to the network of at least one Florida county government" through a spearphishing campaign.

"There was no manipulation or anything but there was voter data that was able to be [had]. Now that voter data I think was public anyways, nevertheless those were intrusions," DeSantis said at a press conference Tuesday after being briefed by federal authorities Friday.

DeSantis declined to name the counties, citing a non-disclosure agreement with the FBI. .

An FBI spokesperson said in a statement to ABC News that non-disclosure agreements are required when someone is given access to sensitive or classified information.

Regarding Friday's briefing, the FBI said it provided "information involving the attempted intrusion into Supervisor of Elections networks throughout the state. The FBI also provided assurance that investigators did not detect any adversary activity that impacted vote counts or disrupted electoral processes during the 2016 or 2018 elections."

After the 2016 election, U.S. officials said that Russian hackers likely targeted systems in all 50 states -- what some compared to rattling door handles -- and said that some were able to get through, though officials did not say exactly where the intrusions took place. The Department of Homeland Security and the U.S. intelligence community said there was no evidence that any votes or vote tallies were manipulated.

Illinois was previously identified as another victim of an alleged Russian voter registration data hack, in which the personal information of 500,000 voters was believed to have been stolen. Voter registration systems are separate from the machines actually used to vote, which are generally not connected to the internet.

Since the 2016 election, security officials and experts said the U.S. has made significant progress in protecting the voting process, but there's much more work to be done before Americans cast their ballots in 2020.

"There's a lot of things that keep me up at night," a DHS official, who spoke on the condition of anonymity, told ABC News last month. "What could our adversaries do? What could they do to undermine our democratic system?... I'll certainly be nervous but confident in the lines of communication we have and the steps that we've taken."
Report a correction or typo
Related topics:
abc newsnational
Copyright © 2020 ABC News Internet Ventures.
More Videos
From CNN Newsource affiliates
TOP STORIES