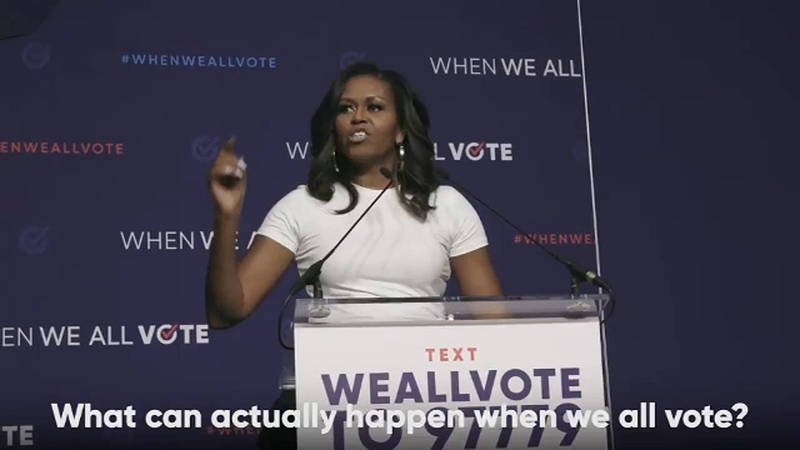 For New York State residents, the deadline to register to vote in next month's mid-term elections is Friday. New Jersey residents have until October 16th. Those of you in Connecticut can register by mail or online through October 30th, and in person through Election Day.

Now, Former First Lady Michelle Obama is enlisting celebrities to help people all across the country to register. As one celebrity told me, when Michelle Obama asks famous folks to be part of something, they are quick to say 'yes'. In this case, it's a non-profit group the former first lady has launched called 'When We All Vote.'

Mrs. Obama says she's not there to tell anyone how to vote, but her message in a Public Service Announcement (PSA) is a call to action. "This election," she tells people, "is your chance to hold your leaders accountable."

Among those heeding her call is Keegan Michael Key, one half of the comedy duo, "Key & Peele."

He told one rally in Manhattan, "when we all vote, we translate our outrage, our passion and our hope into change."

Key was among the stars who gathered at Columbus Circle on September 22nd.

After addressing the crowd, Robert De Niro said, "even if you vote in a way that i don't agree with personally, but it's important to vote at least make your voice heard."

Among those present was Broadway performer Kirsten Wyatt, who said, "it was sort of a battle cry for democracy." She is part of a group called "Belt The Vote" - which has been registering people at theaters.

Also involved is Nnamdi Asomugha, an NFL Player turned actor. He explained his involvement this way: "I don't want to be one of the people on the sidelines complaining, you know about things going on without being the guy putting his foot forward and making change happen."

Thanks to your cell phone it's never been easier to register to vote.

That, "starts the process," Nnamdi explained, "and it makes it very clean for anyone who has questions and doesn't know how to get the process started."

Asomugha is doing double duty right now, urging folks to vote while getting ready to appear at Manhattan's Vineyard Theater in the play, "Good Grief," that opens Thursday. Busy guy -- but the stakes are high: One in every five Americans who are eligible to vote, aren't even registered. "When We All Vote" is hoping to change that, one text at a time.